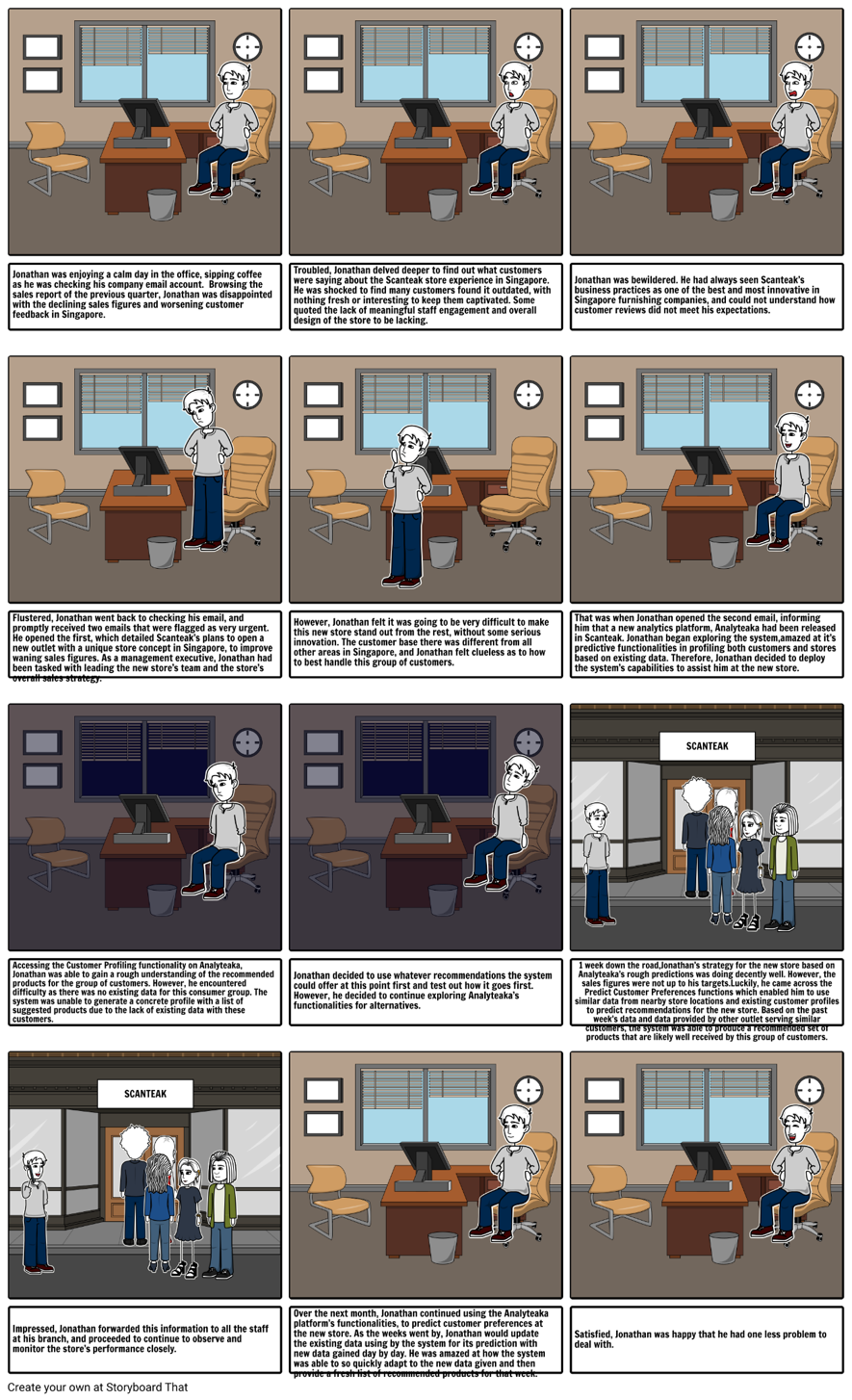 Jonathan was enjoying a calm day in the office, sipping coffee as he was checking his company email account. Browsing the sales report of the previous quarter, Jonathan was disappointed with the declining sales figures and worsening customer feedback in Singapore.

Troubled, Jonathan delved deeper to find out what customers were saying about the Scanteak store experience in Singapore. He was shocked to find many customers found it outdated, with nothing fresh or interesting to keep them captivated. Some quoted the lack of meaningful staff engagement and overall design of the store to be lacking. Jonathan was bewildered. He had always seen Scanteak’s business practices as one of the best and most innovative in Singapore furnishing companies, and could not understand how customer reviews did not meet his expectations.

Flustered, Jonathan went back to checking his email, and promptly received two emails that were flagged as very urgent. He opened the first, which detailed Scanteak’s plans to open a new outlet with a unique store concept in Singapore, to improve waning sales figures. As a management executive, Jonathan had been tasked with leading the new store’s team and the store’s overall sales strategy. However, Jonathan felt it was going to be very difficult to make this new store stand out from the rest, without some serious innovation. The customer base there was different from all other areas in Singapore, and Jonathan felt clueless as to how to best handle this group of customers.

That was when Jonathan opened the second email, informing him that a new analytics platform, Analyteaka had been released in Scanteak. Jonathan began exploring the system, amazed at it’s predictive functionalities in profiling both customers and stores based on existing data. Therefore, Jonathan decided to deploy the system’s capabilities to assist him at the new store.

Accessing the Customer Profiling functionality on Analyteaka, Jonathan was able to gain a rough understanding of the recommended products for the group of customers. However, he encountered difficulty as there was no existing data for this consumer group. The system was unable to generate a concrete profile with a list of suggested products due to the lack of existing data with these customers. Jonathan decided to use whatever recommendations the system could offer at this point first and test out how it goes first. However, he decided to continue exploring Analyteaka’s functionalities for alternatives.

1 week down the road, Jonathan’s strategy for the new store based on Analyteaka’s rough predictions was doing decently well. However, the sales figures were not up to his targets. Luckily, he came across the Predict Customer Preferences functions which enabled him to use similar data from nearby store locations and existing customer profiles to predict recommendations for the new store. Based on the past week’s data and data provided by other outlet serving similar customers, the system was able to produce a recommended set of products that are likely well received by this group of customers. Impressed, Jonathan forwarded this information to all the staff at his branch, and proceeded to continue to observe and monitor the store’s performance closely.

Over the next month, Jonathan continued using the Analyteaka platform’s functionalities, to predict customer preferences at the new store. As the weeks went by, Jonathan would update the existing data using by the system for its prediction with new data gained day by day. He was amazed at how the system was able to so quickly adapt to the new data given and then provide a fresh list of recommended products for that week.

Satisfied, Jonathan was happy that he had one less problem to deal with.