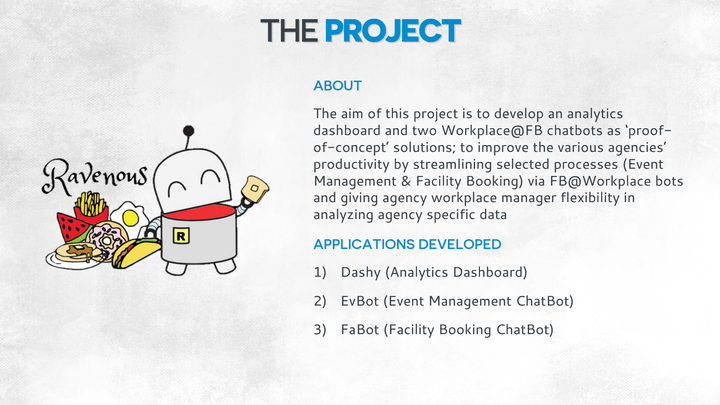 For more information on how to access our applications, please view Quality of Product > Deployment Section

Scope: Good to have 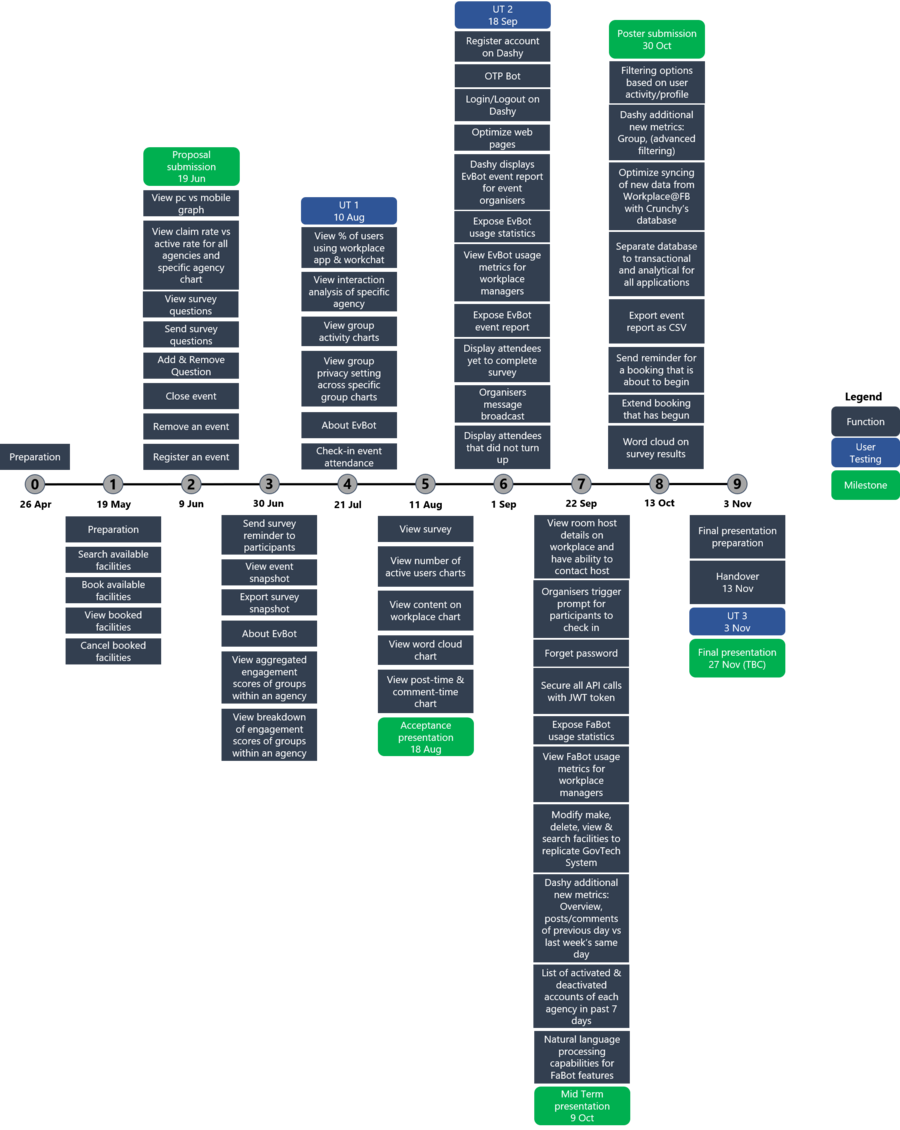 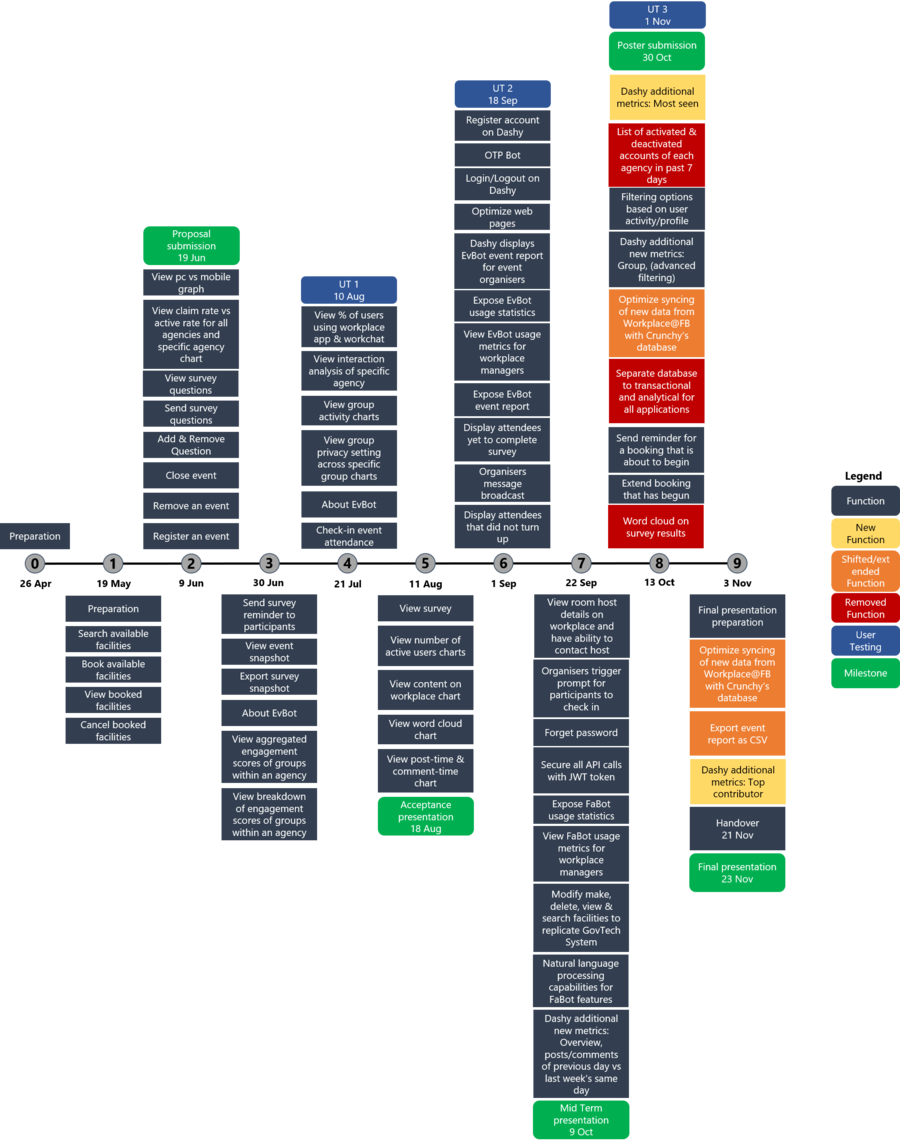 The chart shows the number of completed tasks against number of assigned tasks for all our iterations so far. The bigger the circle, the higher the percentage of task metrics 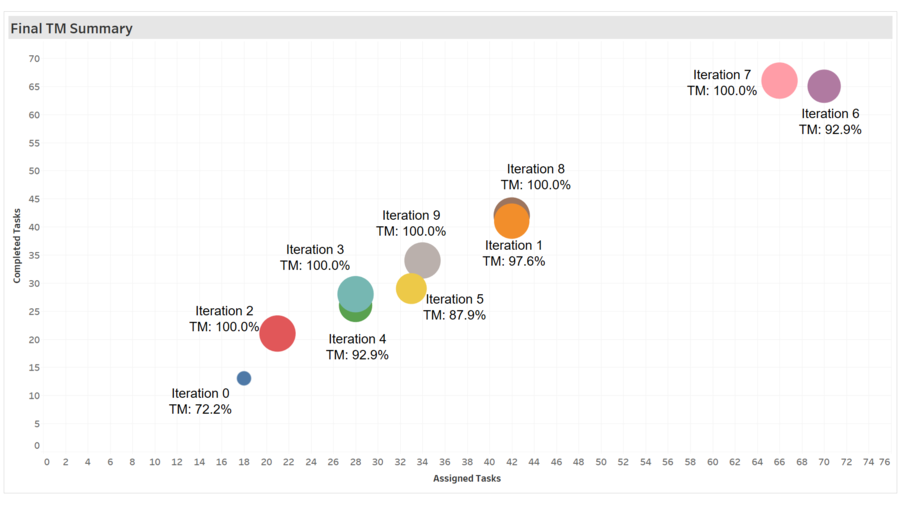 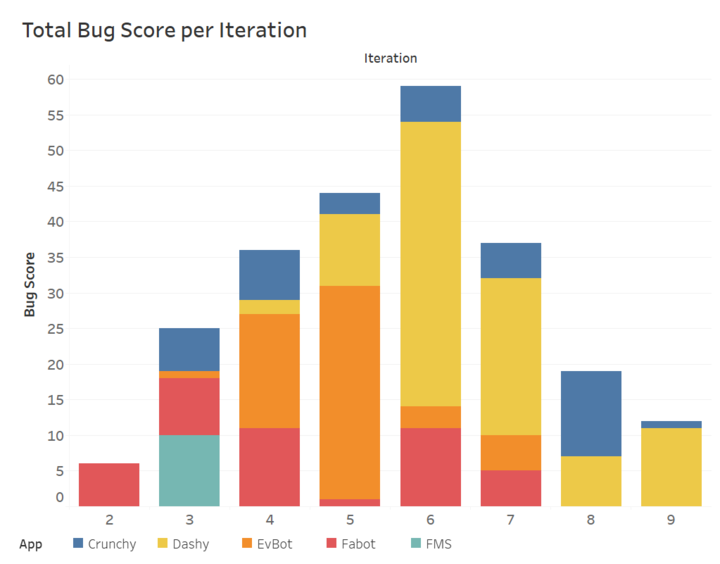 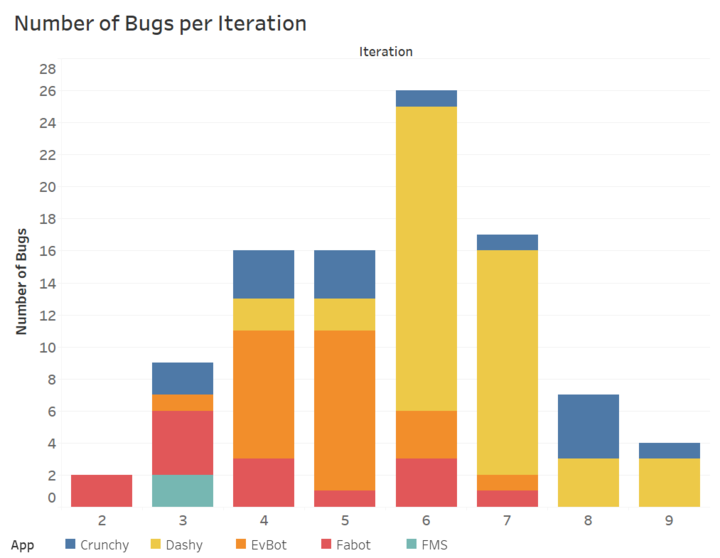 From the period of Mid Term (9/10/2017) to Final presentation, we would like to highlight these two risks as area of concerns.

The initial task of populating our database was a challenge as we constantly reached our memory limit while trying to retrieve and store the data from Facebook Workplace, into our database. Upgrading the instance to a better one was an option but we decided to optimize the memory usage of our code first.

(i) Bluebird Promises
During our mid-term presentation, we mentioned that we used the Native Promise library to approach our asynchronous issues. Bluebird promises work the same say as Node’s native Promise however, it is less memory intensive. The benchmark results can be found on bluebird’s documentation but we decided to run some tests ourselves. Here is the score from the tests we ran using Node’s process.memoryUsage() function: 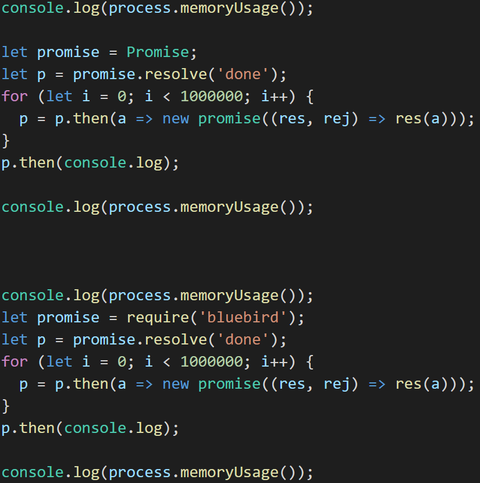 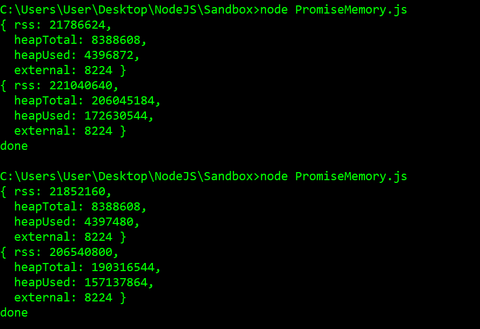 Through our results, the heapUsed for the bluebird library is lesser than the native Promise, confirming the benchmark scores found online. Thus, we refactored the promises that were used by memory intensive functions to make use of the bluebird library (iii) Mongo Cursor and Buffer (Managing Memory Usage)
The usage of cursor is similar to streaming data. Instead of fetching all the data from the database and consuming it all at once, cursor streams the data to our server. 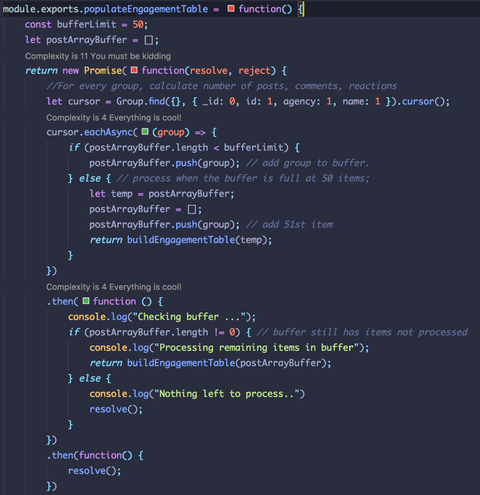 After streaming the data, we manually implemented our own Buffer to batch process the records that were streamed. With the combination of Mongo’s cursor and our buffer, it helped us to manage the memory usage of our application.

Since we had to process approximately a million data, our codes have to run quickly. One of the reasons why Node.js was chosen as the language for this task, is for this very purpose.


With the new version of Node.js (v7.6 and above), came the native async library. We took advantage of this library by making asynchronous queries to our database so that database queries can run in parallel. 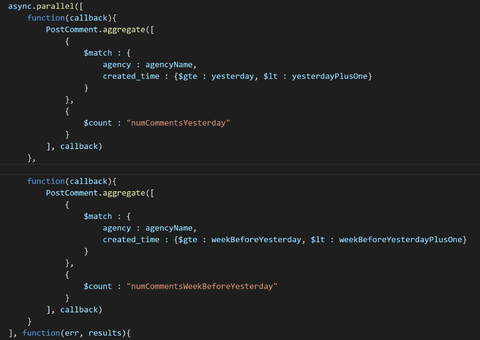 In the simple example above, two functions (calls) are made to the database. However, with the async.parallel function, they are made at the same time. Only when both queries have finished executing, will the code continue with the results of both queries. This helps to improve the runtime processing speed when widely used across the code.


Although the library that we used to interact with MongoDB, named Mongoose, has certain functions to aid developers in using a MongoDB, it is limited. The general find() or findOneAndUpdate() queries are insufficient for more complex queries. Therefore, an easy but inefficient solution is to find all records, and sift out the records we need by iterating through the records. This is extremely inefficient as compared to using the native queries.

Therefore, we had to learn Mongo Queries to improve the speed of our application. We made use of Mongoose’s aggregate function include in Mongo’s operators to perform some of the more complex queries.

Some of the operators that we used include:$match, $group, $project, $sort, $count As of 1st November 2017, there are a little more than 150,000 public servants on the Whole of Government Workplace instance. Retrieving every detail on these accounts would result in a few hundreds of thousand requests to Workplace’s API.

This was an issue initially as we were met with lots of rate limiting and throttle error that were set in Workplace’s Graph API. This limits us to about 200 calls per hour per user in aggregate. We adopted some techniques to overcome this issue:

(i) Bluebird Concurrency Control (Promise.Map)
Bluebird’s Promise.Map allowed us to manage the number of requests we made to Workplace API at any moment.

Furthermore, the concurrency control in bluebird is able continuously make calls at the specified rate of 10. For example, when two requests are done, the queued requests will send an additional two to Graph API.

(ii) Request Retry
Since hundreds of thousand API calls have to be made, there are bound to be failures in some of the calls. During our test phase, we encountered some of failures with minimal explanation. After recommendation from our Sponsor’s Tech team, we concluded that the best way to solve this error, is to just try sending the request again.

To do this, we made use of the requestretry library on NPM.

The library helped us to easily resend the request to whenever an error is returned in the response. From the above options set, the request will keep trying at a maximum attempt of 5 times. After the 5th attempt is exhausted, it will pause the retry for five seconds before continuing to try.

This helped us to overcome the unknown Workplace API errors and allowed us to continue retrieve data from Workplace reliably.

With the new Webhook subscription feature offered by Workplace Graph API, it allows us to update our database data in real-time.

In order to listen to these events from Workplace, we had to set up our own webhooks. The webhooks were set up using Workplace’s interface. Every time a new event occurs, for example a user just posted a new comment, Workplace will send us the payload to the subscribed webhook accordingly. We will then handle the events accordingly.

These are the backend servers that support our applications on Workplace@FB. They do not have a user interface.

- Please note that by logging into our Workplace@FB instance, you will have access to EvBot and FaBot.
- You will need to use the production link above to access Dashy.

Details of internal testing can be found in the deliverable table above.

This project was an exciting and enriching journey for Team Ravenous. Collectively, we not only gain new knowledge and skills about our roles, we also get to expand our professional network. Through this project, we get to meet and interact with PSD Technical Team, GovTech Team as well as business & IT professionals from 6 different government agencies. Through the interactions, we know why are certain processes carried out this way, why they are doing this and so on.