Refer to User Test 2 in our wiki for more info.

MenstruTrack is now in the App Store! Check it out

Refer to User Test 3 in our wiki for more info. 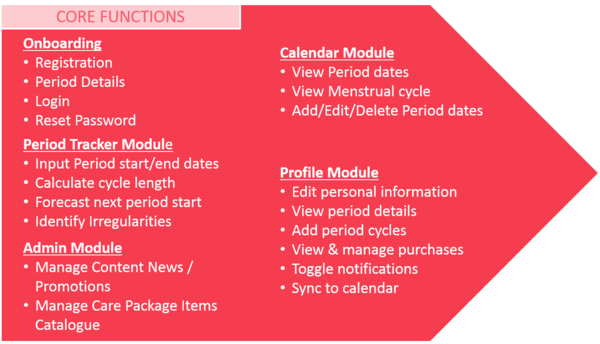 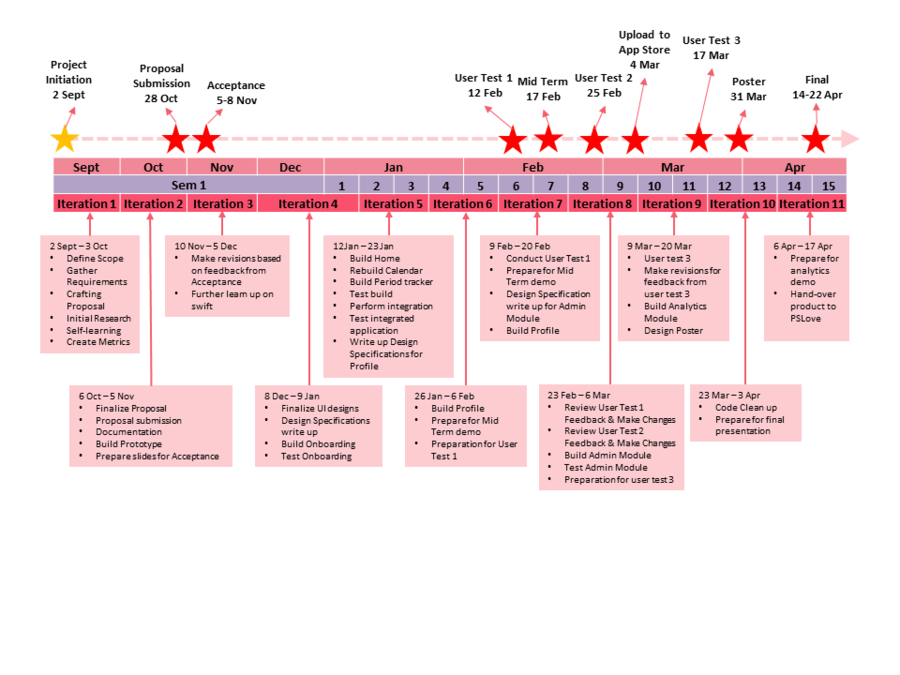 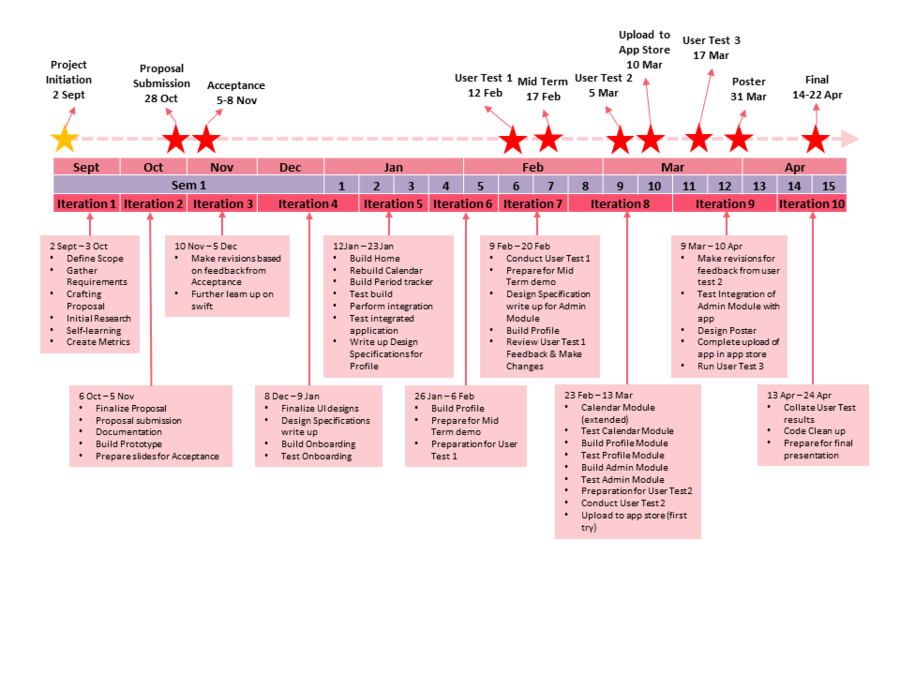 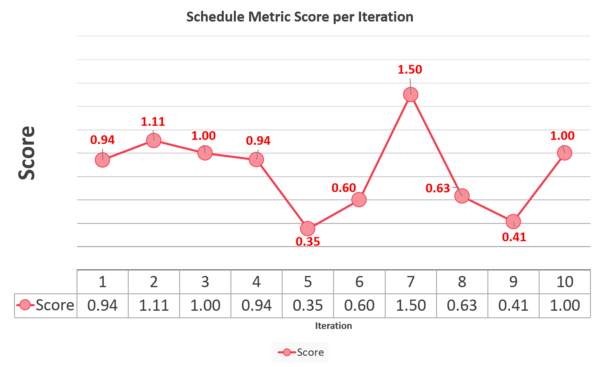 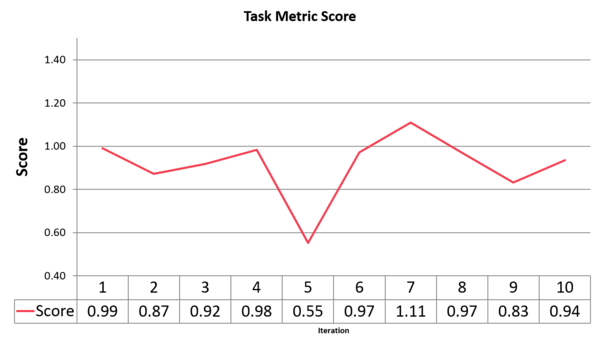 Lessons learnt from iteration 5 taught us not to under estimate coding tasks. This helped us better measure the time required by breaking down large programming tasks into smaller ones which are more manageable and predictable. Hence helping us reduce the fluctuations in the task metric measurements. 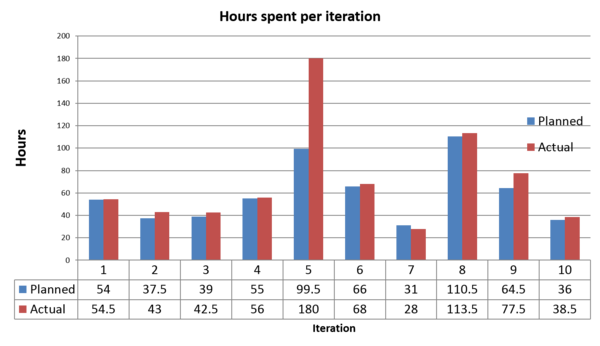 The Planned vs Actual Man hours depict the accuracy in allocation of time for individual tasks. Ever since iteration 5, programming tasks were better measured with lower variance. The only fluctuation that exists is in iteration 9. This is due to the fact that extra time and effort was used to rectify issues in order for our final push of the app to the app store. This took longer than planned, therefore a slight delay variation. 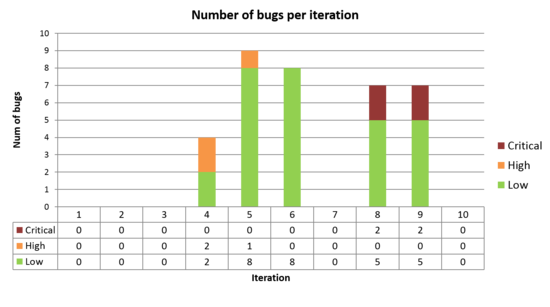 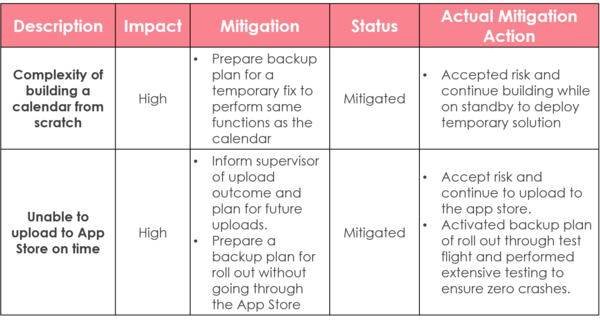 Swift is a new language for building iOS applications. We chose to build in Swift to keep up with new trends. However, learning and developing in Swift pose a challenge due to the limited resources available.

Keyboard Algorithm
During the development process, we realised that at some of the views, the keyboard will cover some of the text entries. This will be especially true for iPhone 4S because of the different aspect ratio (iPhone 4S uses 3:2 while iPhone 5 onwards use 16:9). In order to mitigate this problem, instead of just removing the development entirely for iPhone 4S, we developed an algorithm to allow the top of the keyboard to reach the bottom of the text field.

The process in developing the algorithm: 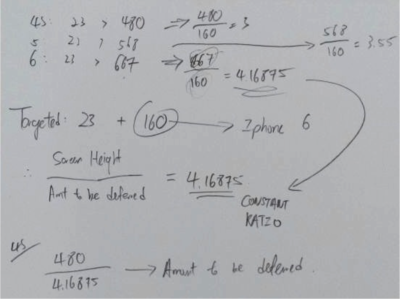 To calculate the amount to be deferred, the universal formula that we derived is Screen Height/The y-coordinate of the active text field. After translating the algorithm to codes: 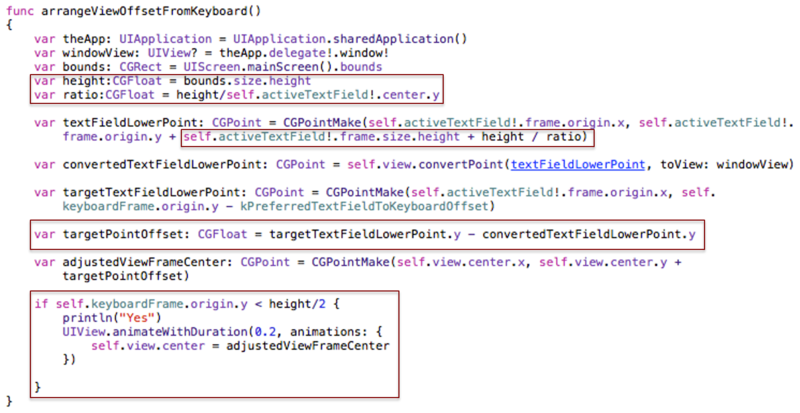 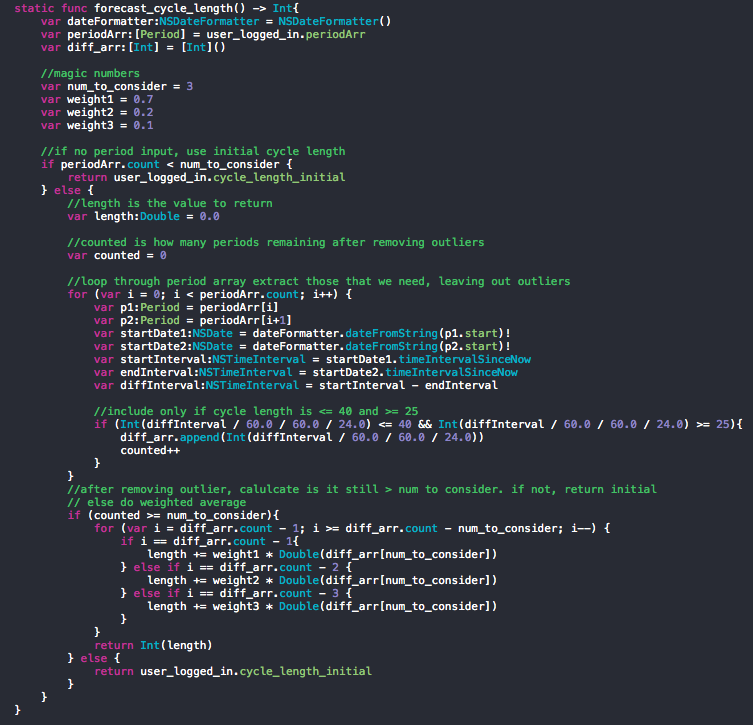 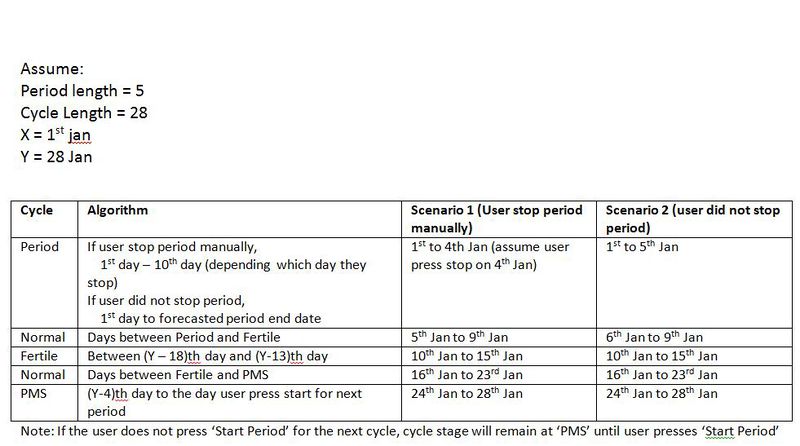 Building an iOS application with Swift was definitely a challenging task for the team, one in which we may have under estimated. Through this experience, we have seen in ourselves the ability to persevere, the aptitude for learning and the boldness to go against the conventional. Despite the initial setbacks and negative feedback, we remained determined to complete the application and to upload it onto the App Store. We chose to focus on what is good and work closely with those who supported us to have come this far. During this process, we had to constantly learn new skills beyond what the school has taught us such as the Swift language, usage of the xCode IDE, Apple's rules for uploading our application and the lady's menstrual cycles. We have come to realise that even something unconventional such as 5 guys building a female related application can be done because app development boils down to simply understanding processes, logic and algorithm which is something that can be achieved regardless of gender. In conclusion, we believe that tenacity, with a little luck, got our app accepted. A sleepless night of rectifying all issues for our final push has definitely paid off.

We started something bigger than all of us. we have to finish it.
Initially when the team was formed, both internal and external expectations were very high as everyone see us as a strong and well-balanced team. Maybe it is because of this, we went ahead and challenged ourselves. As we venture further into the project, we realised that the mountain top seems further away instead of getting nearer. The climb was treacherous and mid-way, during our Mid Terms Presentation, we took a tumble and reality struck; that maybe we could never accomplish what we promised. It was demoralising but like a slap to our faces, we realised the severity of the situation. Instead of turning around and giving up, we pulled each other along and climbed together. Whenever someone faces a difficulty, we reallocated our personal time to help him to along; it was never about me, it is always about us. Throughout this journey, without the support of various stakeholders such as our supervisor, sponsors and professors, we could still be at the mid-way of the mountain. As we celebrate the success of reaching the top, one key reflection that I learn is "Nothing is impossible, it is just whether you want to do it". With the right mentality and perseverance, I am glad that my team has delivered our promises to our sponsors, supervisors and professors.

We challenged ourselves by taking up a project with many uncertainties. For example, we had to learn a new language that little people can help us with and a topic we have no idea about. I have to admit that we failed several expectations and could have done better in many instances. However, what I have learnt from this project, is the importance of attitude. Obstacles and failures are just part and puzzle of life, but what keeps the team going, is the right attitude. It is the attitude to be positive, to be willing to learn and to put in your best that defines your experience. In terms of skills, I have surely learnt more about handling a full-fledged project. Everything we have learnt, from IDP, SE, PMSB, AA, are all put into use. In addition, I have also learnt to use new softwares like POP, iTunes Connect, xCode and Testflight. I have learnt to work with a team with different dynamics.


In all, FYP was a challenge. It showed me the difficulty of creating something that looked so simple to me previously. Most importantly, it showed me that it is not about how hard you fall, but how fast you get back up.

Benefits of the Application