Slides
This project is sponsored by Dentsu Aegis (DA), a multi-national PR and marketing firm. Our client is interested in discovering what consumers are saying online about their customers' products before and after their campaigns or PR strategies.

In this project, we aim to gather as much data as possible from the social media platform Twitter and the popular e-commerce website Qoo10.sg. This data is then used for an initial analysis, to determine the key topics of what users are discussing in their tweets or product reviews. Our application will generate these key topics and allow the data analysts to label them. These labels can be, but are not limited to, the consumer journey as provided by our client as shown below.

After the marketing / PR strategy is complete, the team can return to the application and retrieve data once more. They then compare the difference in key topics from before and after their strategy. They then utilise the data to measure their effectiveness in strategy.

In the duration of the project, our group faced issues both with changing requirements, as well as technical challenges.

The nature of our project is intensive on 2 aspects:

These two key areas are computationally exhaustive and issues arose in several areas.

The application consists of a linear sequence of events where:

Our project scope changed between our major milestones. These scope changes were both due to technical difficulties that could not be overcome, as well as client requests. We implemented changes accordingly and appropriately. Just prior to the mid-term presentation, we received new client requests on the 23rd of February: 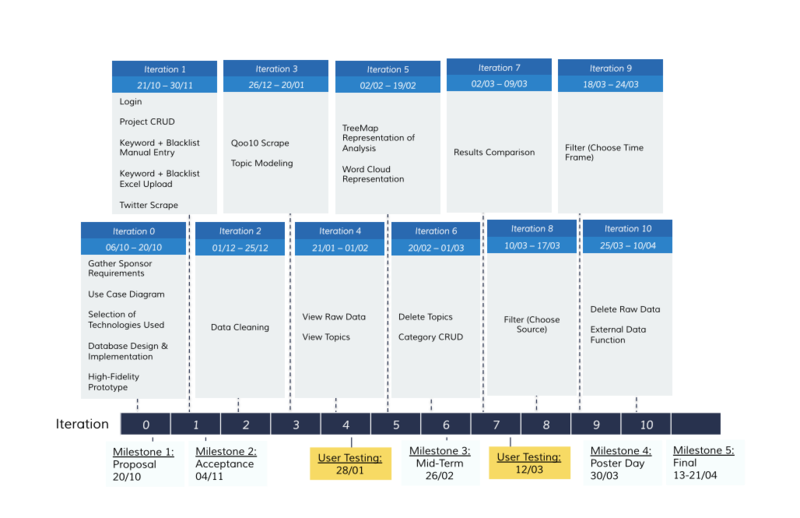 In the course of our project, there were no significant schedule anomalies in the development. Our core issue in the process of carrying out the project was more of managing expectations rather than following the schedule. The additional features that set our project apart from others include:

A totally independent software module was written to serve as a wrapper on top of the open-source software Mallet, that implements the LDA algorithm. Originally, the Mallet software writes the results to multiple text files on the server hardrive. For this project, our team implemented 2 servers:

As project manager for MineSweep, I learned how to interact with our client as well as manage their expectations. Initially when they requested for scope change, I was unable to properly balance the interests of the client with the interests of the team. I learned how to really exercise mitigation plans when risks become reality. This became increasingly pronounced as when the project progressed, the scope change requested by the client did not cease. Toward the end of the project, I learned how to scope to best give benefits for both the team and the client.

Initially I was not very sure what kind of business value this project could bring to the users. In addition, at the beginning of the project, there was a steep learning curve with regards to the algorithms, and we slowly but surely overcame this challenging process. During the whole year, there were many useful things that I learnt, both life skills and academically. With respect to life skills, i learned how to balance meeting the client's expectations and ensuring that the team's capability to match up with the expectations. Being the only FYP group that deals with social media analytics, this project has really enriched my learning journey in university as an analytics major. Towards the end of this project, after going through many insightful discussions with the support from the team, profs and client, and getting feedback from testers, I am very sure that this project we have took can be very valuable to whoever uses it. Gaining this confidence have been very uplifting and definitely is a source of motivation to create an even better application.

This project taught me tenacity as I had to familiarise myself with the LDA algorithm, and be able to explain it to every and anyone who asked. As an analytics student, it really gave me direction in what I might want to pursue in the future.

This project gave me a crash course on consumer behavior and analytics. I learned a lot about data acquisition from utilizing the APIs provided by social media entities. Furthermore, the project was technically challenging given its nature of intensive data collection and analytics. Overall, it was a rewarding experience working on this project together with the talented team members of Minesweep.

I have learnt to evaluate different user interface designing principles such as flat and material design through self-exploration. Also, I have learnt about the different visualization techniques to present insightful information on social media feeds. Furthermore, due to the technical complexity of our project it was difficult to integrate the backend business logic with the user interface. However, I've learnt that by exposing the backend business logic as a web service, it is easy to integrate the user interface with it.

It helps us understand how social media works, and it gives us some direction of how we’re going to improve. Nobody in the market has tried to create this type of product as of yet.