We have ranked the features that we need to complete in the diagram below. (Primary-Most Important, Secondary-Relatively Important, Tertiary-Least Important)

UPDATE 17/1: Client wanted Events to be pushed to primary function as it is a platform where people would be able to indicate that they can join Tournaments 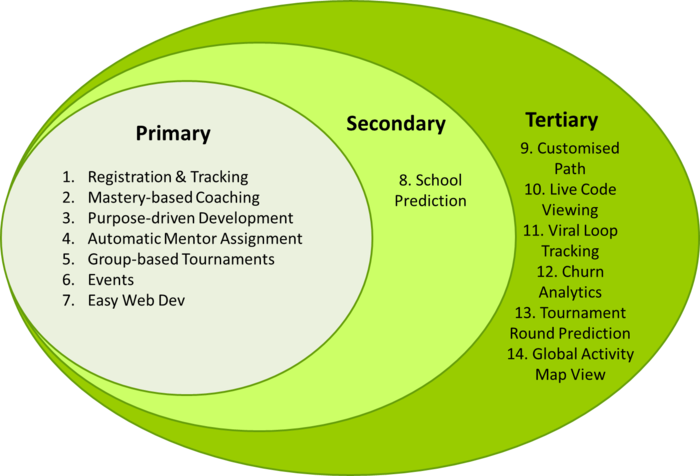 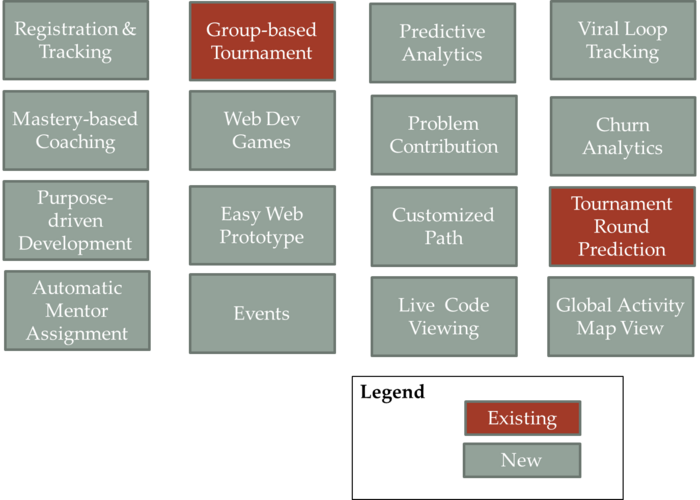 View Paper Prototype
The main purpose of this feature is to encourage users to re-solve the questions they have attempted under Practice so that they can improve the number of attempts and the amount of time they took to solve the question. Users will be able to select a coach to motivate them through the levels, with respect to the language they choose. This is to stress extrinsic motivation to the users

First time users would select one of the 4 following coaches:

Once user selects the coach he or she wants to improve his coding ability with, he will proceed to the next step which is to select the language he wants to improve on. However, if the user has already used this feature in a previous session and navigates to this feature again, the default coach would be the coach he or she had selected previously. If the experienced user will like to change his or her coach, he or she can click on the option “Change Mentor”. This option will appear on the landing page.

Once user selects a coach, user will select the coding path they want to improve on. The coding paths will be named after the coding languages on Practice feature: Java, JavaScript, Python, R Path and Ruby. After the user has selected the path, a coaching session will be launched
However, if the user has already used this feature in a previous session and navigates to this feature again, the default language would be the language he or she had selected previously. If the experienced user will like to change the coding language, he or she can click on the option “Change Language”. This option will appear on the landing page.

Once the user launches a coach session, the page will look similar to the current Practice page (below) 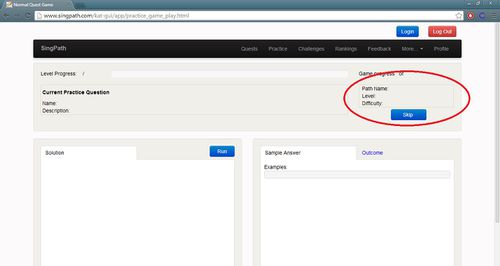 Instead of ‘Path Name’, ‘Level’ and ‘Difficulty’ in the text box on the right (circled in red), there will be a picture of the coach the user selects. Official pictures will be provided by the client. It will be preferable if the image was in .gif format so that the user will not feel bored looking at a static image. In this text box, there will also be a media file that will play the coach’s audio. User will be able to play or mute the volume of the audio file. There will also be a transcript of what the coach said in the audio file in the text box

View Paper Prototype
The main objective of purpose-driven coding is to motivate users to continue coding and cultivate it into a daily habit. There will be a collection of 10 videos which will be given by our client. Players will watch and complete the survey question that is accompanied with each video. The survey is to provide feedback to the client on how well the video's message aligns with the players' own interests. This feature will be called ‘Purpose’ which will appear on the navigation bar above and it is only enabled after the user has completed a certain number of level/badges on the Practice page.
A. Landing Page

If the user clicks the Play button, user will be brought to another page to watch the video. There will be a horizontal gallery of the 10 videos, below the survey. The videos that are locked will have a lock symbol and the ones that are unlocked would have a thumbnail of a screenshot of the video.

If user wants to unlock the subsequent video, the user needs to click an option that displays the survey question like ‘How does this video make you feel?.’ The user will be presented with 5 radio button options such as ‘Really Good’, ‘Somewhat Good’, ‘No Comments’, ‘Don’t like it’ and ‘Hate it’.

View Paper Prototype
The purpose of group tournaments is to create an environment where students will help not only their friends within their group but also their fellow peers who are participating in the same tournament. This is to cultivate a learning culture more than a competitive one.
A. Tournament Creation

User will click the ‘Create Tournament’ option on the ‘My Tournaments’ page. This page will have all the tournaments that the user has created.

Anyone can create a tournament. User will then key in details such as title, description of the tournament, password and type of tournament (individual or group).

If user selects ‘Group’ tournament, user will need to specify the number of groups and the maximum number of players per group. User is also given the option to enable a checkbox, ‘Mentor Assignment within team’. This falls under Automatic Mentor Assignment (explained under part e). Individual tournament is client’s feature.

User also has the option to decide how many rounds in a tournament and the number of questions for each round based on the language and difficulty level. Similarly, user will be able to delete the questions and the rounds if they wish to. User can also set the status of the tournament. Once they have created, the default status would be ‘pending’ (yet to activate the tournament). The tournament is not allowed to be active if no members have joined the tournament. Moreover, the tournament can only be active if only all members are in a group and no group has more than the stipulated maximum number of members.

User will go back to ‘My Tournament’ page to edit the tournaments they created.

Once user clicks ‘Manage’ on any of the tournaments, he or she will be directed to a page similar to the create tournament page except all the fields they have previously entered is displayed, not blank. Hence, he or she is allowed to edit the fields. In the case of group tournaments, user would be able to remove participants and also add them to groups who have insufficient team members.

This page will be catered to the participants. There will be a list of active tournaments, both open and closed ones.

If user joins an open group tournament, they will be directed to a page that displays the information of the tournament like the title, coding language, the number of questions, registered users without a team and groups that the user can join for the tournament. The ‘Join Team’ button will only appear for teams that are not full yet. After the user joins team, the page will be refreshed and their name will appear under the team. At the same time, user can leave team as well.

The one who created the tournament will be directed to the live ranking page which displays the ranking of the group, rank within the group, player’s name, individual ranking, questions completed, whom they are assigned to or mentored by, with respect to the round they are currently in. This page will be updated live and if user wants to end the tournament, there will be a ‘End Tournament’ button at the bottom.

View Paper Prototype
The purpose of this feature is to encourage an environment where participants help their peers out by teaching them how to solve the questions they are stuck on, and not a competitive one. This feature is only enabled if the admin of the tournament enabled the "Mentor Assignment" check box
Landing Page(Mentor View)

The live ranking page will be inclusive of this feature. Once the first player completes the last question, he will be greeted with a congratulatory message (where the question usually appears). In the textbox on the right, where there are details such as progress of number of questions completed, round number, and current rank(in team), there will be two fields called “Assigned To” and “Mentored By”. Hence, when the user completes his last question, he or she will be assigned to his or her group member who currently posses the lowest inter-team ranking.

This feature is important for SingPath as it is a platform where tournament events can be posted and see the number of people who will be attending.

A. Landing Page
The title of the tournaments will be displayed, along with the description and registration status. The registration status is dependent on the options the user clicks which are:
If user is not logged in to SingPath and he or she tries to access the Events page via clicking ‘Upcoming Events’, there will be a pop-up message prompting the user to login first to register for the respective event.