Since started off as a passionate team of 5 in May, we have gone through 4 iterations of construction, learning and verifications. We have strictly followed our core methodology, to Build, Measure and Learn that is adopted from Lean Startup. This methodology not only teaches us to change/pivot when necessary, but also to prevent wastage of efforts and time. Not only do we have to grab every opportunity to verify assumptions, build with leaner resources and learn from results, we have to understand client's needs and handle ever-changing situations.

What we have done thus far:

Despite having a clear schedule and backed with good responses from Clients, there are still unseen situations that arises and needed our attention to either rectify the problem or grab the opportunity that improves our product.

Despite having several additions in our project scope, we managed to narrow down the non-functional requirements of the applications and added an extra week in Iteration 4 to accomodate our User Tests.

Tasks with "-" planned dates are newly added tasks that was not initial in the project milestones.

We have chosen Schedule Metric and Bug Metric as it best suits a development for iOS due to expected rapid changes in schedule and unforeseen bugginess of a mobile app. 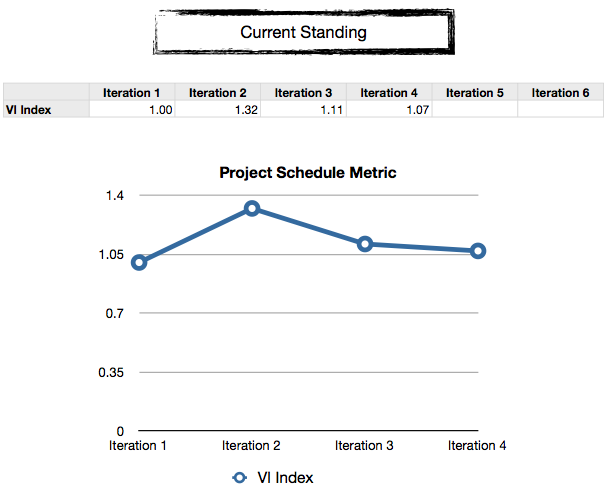 The team managed to complete new tasks on time in iteration 1. However, the technical complexity that we faced in iteration 2 was on a different level and we did not expect to face issues with customized survey styles and Facebook Login. This caused us to push our schedule back by 5 days.

Another issue was the delay of APIs from Sageby. This delay caused us to lose up to another 5 days in testing and development, and we had to hard code dummy data in order to meet the requirements for User test 2 for the iteration.

After Iteration 3, we had to re-scope iteration 4 due to several milestones to be met:

In iteration 2, we faced numerous issues regarding unknown durations for new tasks. In iteration 4, we revised through these tasks and scope out based on the team's experience with development. We had to add 2 weeks to iteration 4, out of the 3 buffer weeks intended, in order to accomodate 3 other major phases, iOS6, Live Database and construction of APIs.

The schedule metric has been highly useful for us by providing us with an better grasp of our current situation and to track the amount of time we took with difficult tasks. Project Manager was also able to efficient allocate extra time and also to meet up with changing demands and opportunities such as the unexpected chance of deploying a real survey for UT3. 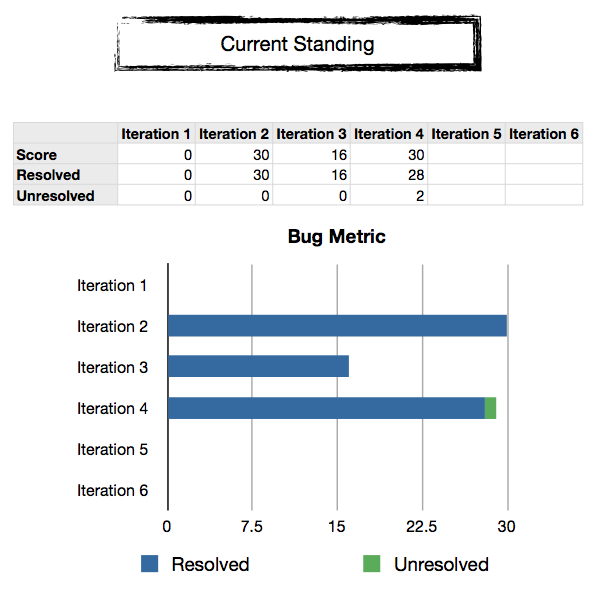 We needed the Bug Metric to answer 3 important questions during development:

With the aid of the Bug Metric, we managed to identify key issues, which includes Facebook Login and sharing and persistent UI Bugs. Coding in Storyboard with Objective-C bypasses the conventional coding of transitions of Views in iOS. This is a huge improvement in convenience for new developers such as us, but when bugs arises, we need to identify the location of it and to rectify the issue by diving into the source codes and make manual changes.

Overall, the Bug Metric shows high correlation with the Schedule Metric and this is a relatively positive indication for the Project Manager that data collected responds well with the different Metrics in use.

We have split the risks into 2 components, Client and Project Management. Client's risk are rather intensive as Sageby is a new startup and they face plenty of risks that we have to take into account. Project Management on the other hand is rather standard but requires clear mitigation plan to avoid confusion within the team. 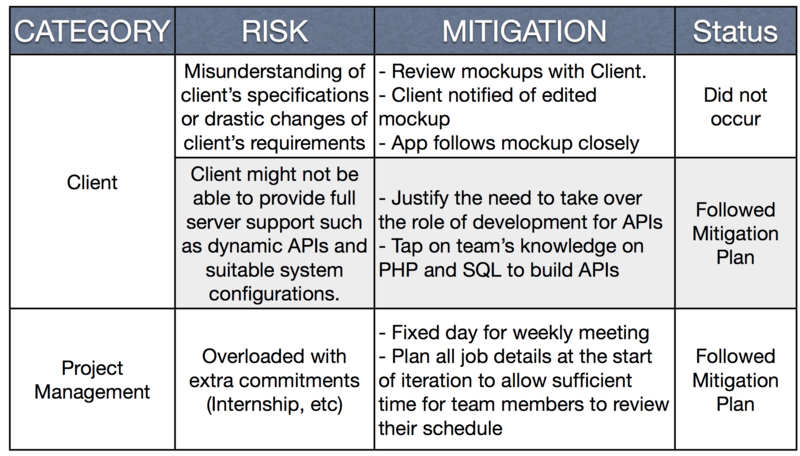 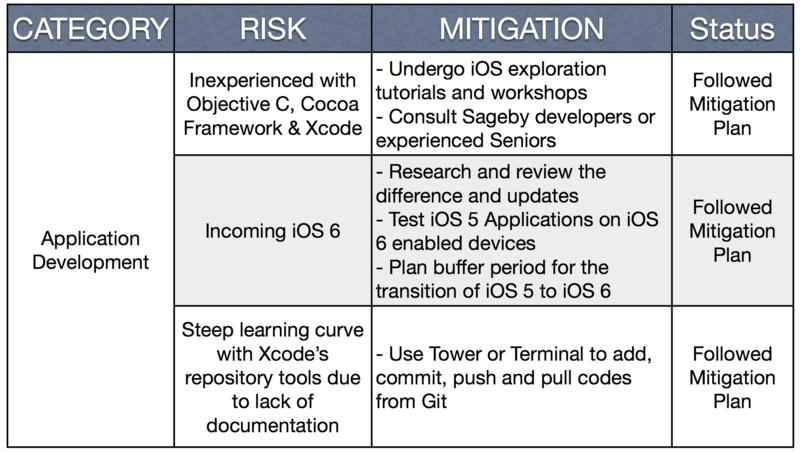 Technical Complexity takes into consideration of Team Sageby's main development pain points. Although there are other complexities such as Facebook login SDK issues and iOS 6 with backwards compatibility, these issues can be temporarily kept in view due to the immaturity of the SDK and platforms. 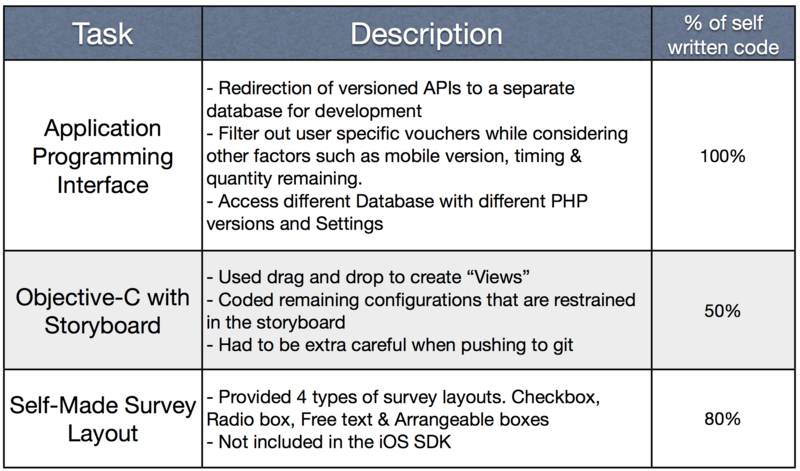 Sageby Surveys formally launched on 18th of September and it comes with a full fledged working survey module which allows users registration with Sageby. The quality of product mentioned below focuses more on the non-functional aspects of the Application as functional tasks list are stated in the project scope. Also, these deliverables are constitutes the structure of the application and ensure its integrity and development modularity. 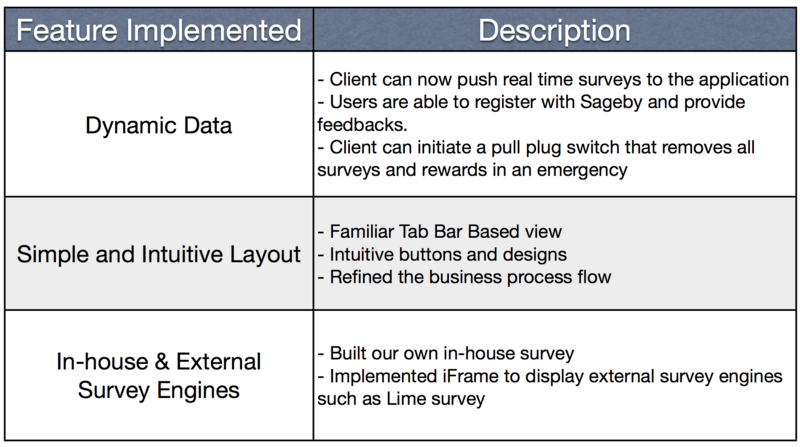 Unit testing is a standard technique in computer programming whereby we break the software into small, independent pieces of code (a.k.a. the unit), isolate it from the rest of the code and test it. The main goal of unit testing is to try and find as many bugs as possible, as soon as possible.

Logic unit testing concerns the testing of the classes logic directly. You only test the logic of the methods, you don't interact with user interface elements or simulate them. For example, testing that a coordinate convertor utility is returning correct values is logic unit testing.

Test Case is a set of conditions or variables under which a we will determine whether an application or software system is working correctly or not. We have up to 50 steps for our Test Case version 3

The main objectives of this UT 3.1 are to gather receptiveness of our functionalities via Provision Phone Simulator.

This UT used a real survey called LTA Survey provided our client. They will do a real survey conducted on our phone, after which they will redeem a real physical voucher for us.
From our questionnaire, we asked about the learnability, satisfaction issues from the application and the highlighted functionalities. At the same time, they were encouraged to provide Heuristic Feedbacks based on specifications.

Altogether, there are 62 responses. Out of these 62, 34 are iPhone users and 23 are Non-iPhone. Also, there are 5 people who prefer not to state their phone model. Gender and age group is not considered in this test because LTA did not state any specific demographic preference.


Users are allowed to express their opinions while accomplishing each task. The intention is allow the facilitators to record observations and important details of the users' thought processes. In addition, the facilitators are expected to look out for errors and navigation issues. Users will be doing by an online questionnaire only after finish using the application. It will be crafted around the usability issues and their satisfaction level of the application.

Based on the 62 responses, they were asked on how easy it was it to do a survey using our application. 80% gave a 7 and above satisfactory rating based on a scale of 10.

To gauge an understanding on how easy it was to learn how to use our application, 58% gave a full score out of 10. The remaining responses span from a scale of 6-10 (87%).

For an overall understanding of the satisfaction gain when using our application, 82% stated a 6 and above rating. Out of these 82%, 24% actually gave a full satisfactory score from a total score of 10.
In a nutshell, user reported about the slow connectivity while doing the survey. Also, some suggestions to the app were to provide a simple walkthrough and incentives to entice people so that they can find the motivation to share the app.

For heuristic wise, one of the glaring issues was a need to have a zoom feature so that user can see the survey question clearly. Other suggestions were a need for a more responsive survey form and include more colors if possible.

What are the main To-Do changes

The main objectives of UT 3.2 are to gather receptiveness of our functionalities via App Store Download Application.

Furthermore, users are able to redeem a real physical McDonald's voucher after completion of a survey within the application.

Altogether, there were 42 responses. Their age group falls between 18 to 22 years old.

A. Collecting Qualitative Data
Users are allowed to express their opinions while accomplishing each task. The intention is allow the facilitators to record observations and important details of the users' thought processes.

In addition, the facilitators are expected to look out for errors and navigation issues. Users will be guided by the facilitators with instructions stated clearly. After which they were required to do an online questionnaire. It will be crafted around the usability issues and their satisfaction level of the application.

Quantitative metrics to be measured include:

-The amount of time to complete each task

Survey
Based on the 42 responses, 31% feel that the survey font visibility is just nice. However, 42% feel that it is larger than average. This is a preferred indicator.

For doing the survey using our application, there were a mixes of responses based on a scale of 10 (1 being very difficult to 10 being very easy). 91% gave a rating for 4 and above while the remaining 9% gave a rating of 2 and below.

As for social sharing, 71% expressed sharing the application via Facebook/ Twitter while 26% indicated no interest in sharing with social platform.

What are the main To-Do changes to our app

o Limitations of iPhone include the smaller screen size and hence landscape mode will only introduce a wider, but much shorter screen content

Our Team has gone through 4 iterations, from scoping, to planning, prototyping, constructing and carrying User Test. 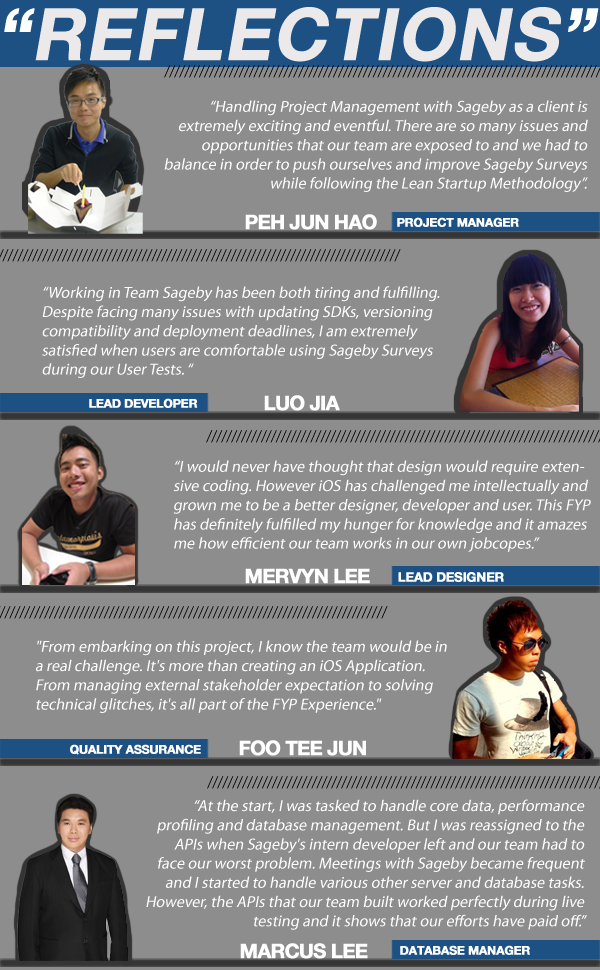