Our project is currently behind slightly behind schedule as we have met some difficulties with customizing and modifying several Drupal modules. However, we have completed 36/44 (~81%) of our supported use cases and (with the extra time available in Week 8) are on track to complete all core use cases by Week 8. From there on, we would be largely doing themeing (the drupal way of doing UI/layout) and making minor UI changes to our developed functions.

Current Video Banner has been rejected again. Will be working on a different form of video banner starting on the end of this week.
New Video Banner will be based on the old Highlight Article Drupal module as it is easier to customise a theme for it.

Compare the project plan during acceptance with the actual work done at this point. Briefly describe a summary here. Everything went as plan, everything has changed and the team is working on a new project with new sponsors or the supervisor is missing. A good source for this section comes from the project weekly report.

Provide a comparison of the plan and actual schedule. Has the project scope expanded or reduced? You can use the table below or your own gantt charts.

We, previously, had 2 metrics in which we measure our progress and the stability of our product.
Unfortunately, after going through 2 development iterations, we have found that the metrics have been ineffective, mainly because:

Hence, we now basically measure ourselves up based on data that we have collected below and ensure that they do not hit a critical threshold.

Our collection for schedule data basically measures how far behind/ahead of development we are. This is measured against the completed/uncompleted use cases that we had set out to support for our project.

Since we work on separate functionalities, it is unfair to measure the entire project's development progress via a fixed metric. Instead, what we do is to measure the individual features and development paths and compare it with the Proposed Completion Date. The further behind schedule you are, the more time you have to spend on development.

From the Proposed-vs-Actual table above, we can say that except for the Wall Feature, all our other development features and functions are going on as scheduled. To address the lag time for the Wall Feature, we have discussed for the removal of a specialised Admin Theme for our project. The member working on the Wall Feature would remain until her work is completed. Also, since the Video Banner has again been rejected (completion date: Week 8), the member in-charge of the Video Banner function will increase work hours to complete it.

Typically, our bugs are:

Our bug management process is as follows:

From the below image, it can be seen that most of our bugs are Class C bugs (ie, they cause minor irritations and no functionality breaks).
Hence, it is alright to move on to the next iteration instead of halting development just to ensure a bug-free product (for now). 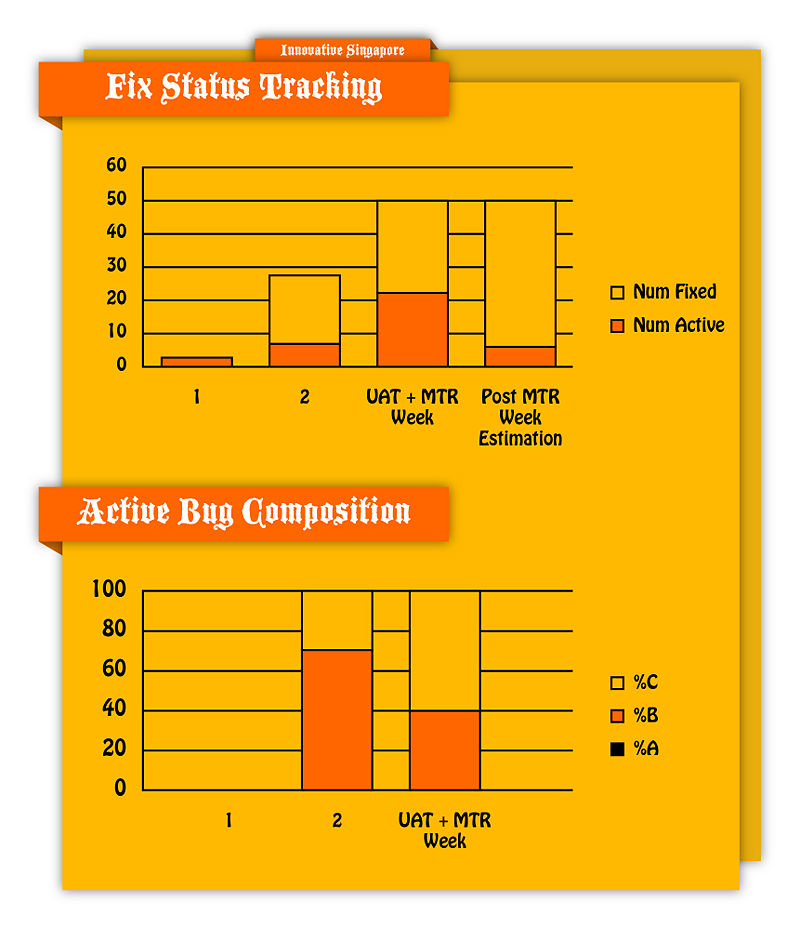 Currently, the Dev-version of our site is hosted, you can visit with the links below.

Our Staging and Live sites are not ready for access or testing as our code has not reached a level of maturity stable enough for deployments on those sites.

Over the course of our project, we would be conducting a minimum of 3 UAT sessions:

We currently split our tester audience into 2 groups for our half-time UAT Session:

I've always been a control freak; there are times that I control group discussions, I control what and how people contribute, sometimes I even go down to the code level and ask for changes to make it more "efficient" or "correct". Unfortunately, for FYP, I can't do that, mainly because there isn't enough time for stick my nose in everything.

Hence, my greatest lesson, and also difficulty, for FYP is to 'let go' and trust the quality of my group mates work and their personal commitment into a project. I guess, beyond gaining some experience with project management and with Drupal, this FYP is an opportunity for me to manage and learn how to become less of a control freak. Which is not easy (in fact, it's bloody difficult!).

So far, there is good team cooperation and everyone is working on assigned task diligently. I feel that the major difficulty which I encountered during the development phase is trying to understand the codes of existing drupal modules so as to find out where I could begin the modification as well as how the module actually work. I need to find out which files are modifiable and which is not. I would say that understanding other's people codes and then make modification is not easy.

The other major difficulty which I encountered is theming the entire site. I'm neither a very creative nor expert in designing the entire site's look and feel. I have provided several design such as site design, logo design, and trademark design to client but until now they did not give me a direct answer as to what color they preferred for the site as well as which design they like best for the site. Most of the time, they are giving me advise as to which is a good website to "copy" their design and layout.I find it hard to deliver a site layout and design which will make them happy. I start to think that this entire project somehow got shifted to more designing then technical which I feel it is not right.

Drupal theming is also not as easy as people perceive because they are not like normal HTML pages which you could hard-code stuffs. For Drupal theming, I need to understand the codes which aligned each elements in a page and the correct region which will be displaying the blocks. I also need to find out how to create regions as well as custom pages using PHP.

We are appreciative of the fact that we have weekly meetings with the clients. Hence, we are able to detect early which changes are necessary to best suit the needs of our clients. Looking through many layers of codes and trying to understand them takes quite some time before I can figure which part to add/change code. Drupal has its defined hooks which are internal events so we also have to understand the Drupal API before we can make code changes.

As the client liasion, I have learnt the discipline to send weekly reminders to the clients as well as team internal meetings. The greatest takeaway so far is to manage the clients' expectations. This is because we are expected to show something new or make changes to existing feature everytime we meet them but we also have to juggle with our increasing academic workload as the weeks progress. We are very motivated to make changes according to the feedback of our clients.

From the beginning, I have had quite a lot of difficulties with setting up the application and catching up with other people's progress. I greatly appreciate the guidance from my teammates as well as the encouragement from the supervisor and clients. Currently, I have acquired some important knowledge of the Drupal modules, especially those related to the Badge system. The most difficult thing that I am encountering right now is the user interface, on how they will view the badges that they have earned, and other users' badges within the homepage and the user profile page.

But I have a strong belief that I will be able to do it. I think as long as we put more effort and have a good time management skill, we will be able to finish the project to the best quality. About our team, we are not as close as I expected. We are getting busier and busier with our academic workload and worries for the internships, career, money. However, during our meetings, we are still having fun such as asking PM to be our waiter (buying lunch for everyone), making fun of PM's long hair ^^ errr... while integrating our coding parts.

This project allows me to understand a little bit more of the modular concept behind drupal powered sites. Although it is supposedly to make content manager/developer’s life easier, it does take a lot of time to learn and build as well. To unlearn and be open to re-learning is an extremely important factor as its framework is totally different from anything else that we have ever learnt before; and the modules are developed by thousands of other drupal developers around the world. There are a lot of customisations to be made for this project and to run through that thousands of codes / files developed by unknown people would really be time-consuming and overwhelming but I believe it will be a rewarding experience. Project aside, initially the team was reluctant to take any sort of risk (to integrate codes and work together from the same repository) and worked on the functions in silos instead. It turned out that we were not functioning as efficient as we wanted to. Instilling trust, clear communication, and developing interdependency are the fundamental keys to productive teamwork. Without any of these, the team will all fall apart -- which is of course, will not happen to Fission1.