Project is reaching completion with the team collecting the data from the UAT test and also refining and adding of the documentation which is required.

After the mid term presentation there was a few changes made to the project as team GURU needs to accommodate to the new requirement by client and some feedback made by reviewers. Team decided to contribute more hours during the period from week 8-9 which. The following key highlights are listed as follows relating to the project.

Also the client requests to have some new insertion relating to the profile section ie; Birthday, gender and policy disclaimer relating to the copyrighted music. Feedbacks were also made by the reviewers toward the practice song page on the font and overall improvement on the user interface. Further enhancement was also made to the application ie; swap summary, login with salt, auto complete, password hash and pagination. Team also conducted a detailed UAT testing from the period of week 11-13. The results are then collected and determine if there a need to change base on the level of impact.

Event highlights: Team was planned to visit the church from week 11 – 13. However, due to some management issue, the team can only conduct the test online from week 12-13. Additionally, changes were made by church members after the UAT test was conducted on some improvement needed on the application. Another issue that team encounter is the deployment issues as the management withdraw from deploying within the church.

Refer to team reflection located below.

For technologies, member look into ways to manage the information as the database store a large records of members and team decided to look into pagination to sort the information accordingly. Next, team member also faces the issue of remember names of recipient when sending SMS notification or email hence javascripts are used to provide auto complete search for these names. For practice songs, jplayer was used to accommodate a dynamic list of songs categorised accordingly to each category.

For the administrator, the adding of songs and lyrics provide fully customisation for each verse of the lyrics the methods used was to provide delimiter for each of the sentence with a timing before switching it to the next lyrics allowing customisable for any new recorded songs which are uploaded into the system.

Team Performance Metric is calculated on the number of hours contributed each week where the metrics are measured base on the complexity of the function and the changes made by the client.

Each hour contribution made for each iterations per week is recorded and a chart is generated as shown below which allows team member to identify the amount of contribution which is being made for the week. 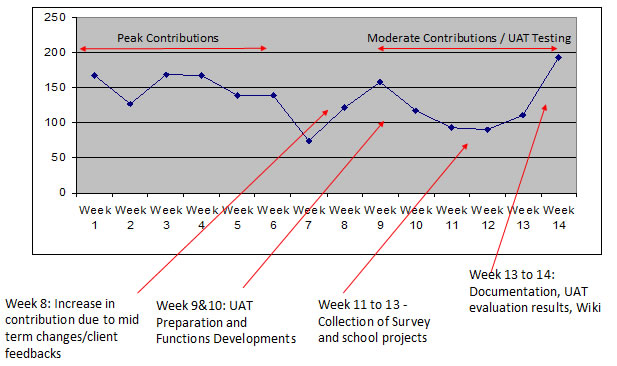 •Bug Tracker: Number of bugs/week Measured based on complexity of the functions 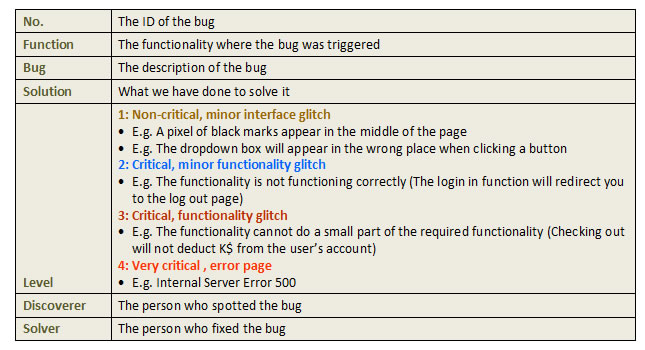 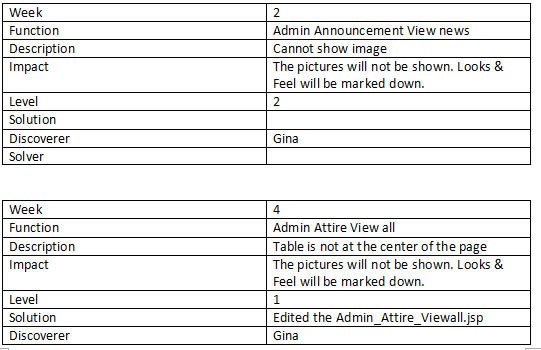 Complexity of the code for Swap Duty and Practice song can be located inside here. Technical Complexity[1]

List the artifacts produced for this project. The entire deliverable can be submitted in a separate thumb drive, web repository or place in the IS480 team wiki.

For the church management system, the duty roster, swap, SMS, search songs which allows re-usability of the coding development. As most of the codes can be applied to other types of management systems as the following functions can be reused without major changes to the codes. Also the team develop the application base on Model, View and Controller. 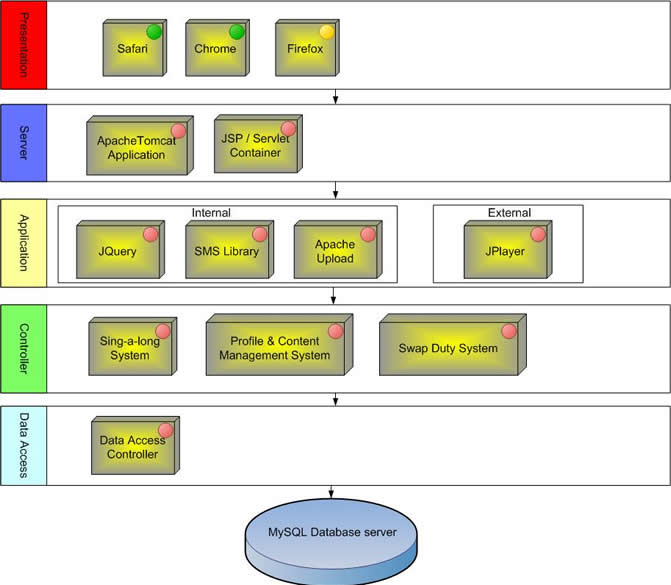 During the UAT test, due to some limitation by the church management, team have to conduct the test via e-survey online during Week 12 and week 13. A total of 69 people (59 members and 10 administrators).The test was conducted using a online document which church members was brief. before carrying out the task.Members tested on the system on its functionality of the system and error checking.

The test cases can be found at the following link here:

The survey results: The results are collected and the overall chart is as follow

100% of the choir members who did the UAT finds it satisfactory and will use the system in the future. Overall the feedbacks indicate positive feedback on the system. Only minor changes are required for the system. The survey are consolidated between week 11 and 13 with both hard and soft copy. Feedbacks relating to the key function for swap duty indicates positive feedbacks where members find that it was easy to use which helps to save time and convienence for members. The next key function would be the practice song where members are positive and commented that the sing-along-page is engaging with the concept of a "karaoke".

Also team conducted the UAT test internallly during mid term with Grouper and highlighted some of the issues. The test cases and results can be located in the mid term folder here: https://wiki.smu.edu.sg/is480/MidTerm_Report In addition, the UAT test results also found out some bugs which allows team members to further improve on the function. Each of the Bug are being captured into the team bug tracker which can be found here:

Team member has learn on project management on how to prioritize our functions and restructure of project schedule accordingly with the function. The project management also plays an important role between the team with the supervisor and the client. Also when handling clients and members in the church it is always important to highlight the issue to everyone so that the members are able to provide the best accurate results when doing the testing considering that they understand the intention of the test. User acceptance test also plays an important role to understand the feasibility, quality and improvements made to the functions. New technologies such as the use of Ajax, practice song with synchronizing allows team member to tap on one another strength and weakness to compliment one another skills.

Each team members has looked into ways contributing to the team project. Improvement can be made with the need better look onto how the application can be further improved for example to customize member personalize play list for each user who logged into the system. Team has look into ways of enhancing and improvement on the functions base on UAT tests and have taken self-initiatives to look into ways of expanding the functions. Also the every member contribute his effort towards meeting 4 days a week and meeting up with client once every 2 weeks. In addition team members also help out with function by pairing it up to support one another team progress to ensure that it meets the project schedule for every week iteration.

Comments/Feedback was consolidated base on members and client inputs in overall.