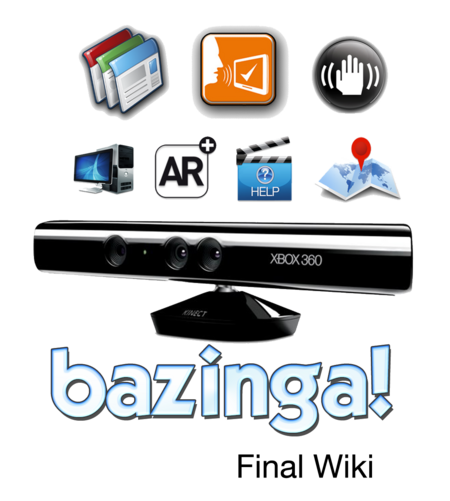 Since 23 February, we have gone through 7 iterations with the assigned functionality being completed timely every iteration. During these 1.5 months, our team accomplished the following:

While the team has put in much effort in planning the execution of the project, there were some unexpected events which forced the team to take certain corrective measures as list below: 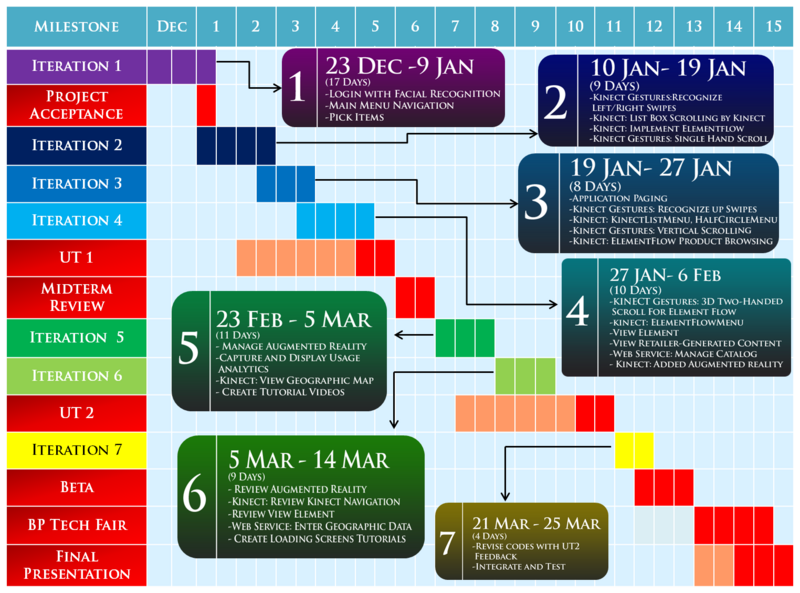 Comparing our project plan during the acceptance with the actual work done, our team feels that almost all the tasks/functions have been completed as plan. We had made some minor adjustments to our project schedule due to an additional functionality in order to justify the benefits of a Kinect app as opposed to a touchscreen app.

The following is a summary analysis of our project metrics for the first 4 iterations. For more details of each metric, please click here.

Apart from Iterations 2 and 3, the team managed to finish the planned tasks within the estimated period allocated for each iteration. Iteration 2 took 2 days longer as the team went through more revisions to the storyboards than planned. This allowed us to make sure our scope was agreeable to all our stakeholders. Iteration 3 took 4 extra days than estimated previously and the course of action taken by the team was to extend the iteration. However, only the back-end web app was affected whereas the Kinect front-end was on schedule.

So far, the schedule metric served our team well by allowing us to have a better grasp of the actual duration needed to develop a function, so that we can better improve our estimation of similar functions in future iterations. This helped our Project Manager when he had to revise the project schedule at the end/beginning of each iteration.

For example, during the first iteration, the team's estimation for the assigned tasks was rather not accurate for most tasks (because the Project Manager used his experience with Windows Phone 7 development to estimate the schedule initially). However, the schedule metric results collected during the first few iterations helped the team to revise the estimated duration for Iterations 4 to 7 in an attempt to better reflect the eventual duration required for the remaining iterations.

Maintability Index metric is the only metric that have Color coded ratings. It is used to quickly identify trouble spots in code and reveal code smell. It can be used together with cyclomatic complexity and lines of code metrics in order to reveal code smell which is any symptom in the source code of a particular program that may have the possible indication of a deeper problem.

For example, using logJointStatus() has potential to be refactored. It has a relatively low maintainability index (even though >20 and a high complexity relative to other methods. Takes up almost half of total lines of codes in parent class 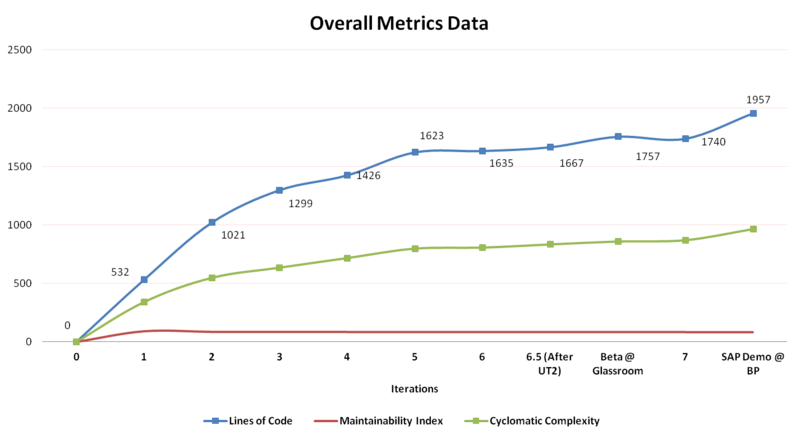 Throughout the project, we have learnt that the impact and likelihood of certain risks presented during the project acceptance presentation did not turn out the way our team thought they would. For example, we used to be quite worried with integrating Bump API into the application but it turned out that the unstable Bump connection (due to the Bump's Android API being only in beta currently) was a bigger cause for concern. Next, the frequent disruptions to our server's uptime during Iteration 1 also did not occur at all in subsequent iterations so our team's reliance on our iLAB infrastructure was actually downgraded as a risk. Similarly, Bump service downtime which was observed in Dec 2010 also did not occur since then, therefore the likelihood of the Bump service being down due to maintenance was also downgraded.

Lastly, when the semester begun to kick into full swing, our team started to feel the heavy workload of juggling FYP with other SMU modules, such as assignment deadlines and midterms. Hence, we added this as a risk that was very likely with high impact.

Technical complexity of the task/function/features shown below.

Our User Test 2 took place on 21/3/12 and ended on 27/3/12. A total of 35 testers participated. In order to ensure that our test results are not affected by any biasness, our testers included students from different faculties and include a mixture of both non-Kinect and Kinect users so that we can anticipate the general public's receptiveness to our application once it is launched. The following documents were what we prepared for our User Testing 2.

Feel free to view the schedule and User Testing execution process that has been prepared, as shown in the first external link. The second link is the feedback form that all testers will fill in after trying out the testing.

UT2 Goals
Collect useful usability and gesture feedback from our testers to better understand their needs and improve our existing application. Comments: Non-SIS students represent the user population from other faulties in SMU and their comments tend to be much less technical, reflecting most of the actual target public users. In addition, they also require much more guidance than SIS students, who are more experienced in application development and new technologies. Non SIS students provided us with an interesting dimension to the feedback collected, such as more of the business feasibility of the Kinect application, as compared to the SIS Students who will be more inclined towards the technology, and will tell more of which functions are more useful.

The instructor, on the other hand, is also very technical and provided us the best advice and opinions for a user to pick up gestures naturally, and how the application will be suitable for the public, based onher vast experiences with lots of applications. 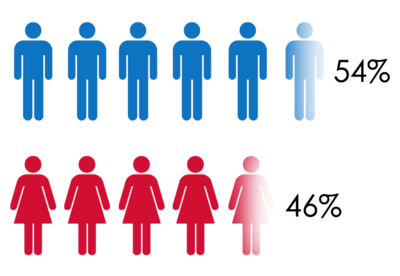 To ensure that our 2T1 meets our objectives in allowing the tester to use the application without our help, we made it a non guided User Test. We wanted to verify if the users could pick up the gestures naturally and provide us opinion on how our group can further improve our application. Thus, we will place instructions at the side of the tester (both left and right) and the user will follow the steps required to allow us to know which features require more help from the user, without the need of someone to provide immediate help.

Our team has prioritized the following list of issues that our team will embark on before UAT2.

For more information on our UAT 1, you can download our documents below:

These are the skills that we had learnt so far from each iteration: