Since 30 August 2011, our team has gone through all the milestones and has successfully deployed our solution for use by the client. The team has completed:

During the entire project execution,there were some unexpected events or changes which forced the team be proactive and implement alternative solutions as below:

As the end-product of this solution is a real-life deployment that is to be used worldwide, there are several criterias that are important to the client and in doing so, there are some challenges faced by the team during the development process.

Due to it being a large-scale project to be deploy in real-life, the team is unable to find an adequate solution for our needs, which is to sync the video asset from FTP to a local drive which is free.

Since ASP.Net was not taught in school, the team faced some challenges intially in getting the grasp of the technology as it is widely-used in the entire project. Hence, the team has to search for ways to understand ASP.Net in the fastest possible way.

The major challenge faced by the team is the constant adjustments needed to ensure successful deployment. As it will be real-life deployment, the team has to understand the necessary factors for deployment where minor things such as version difference will affect the deployment of the solution to the client's workplace.

Despite the challenges and difficulties faced by the team, the team is pleased that there are still some achievements such as: 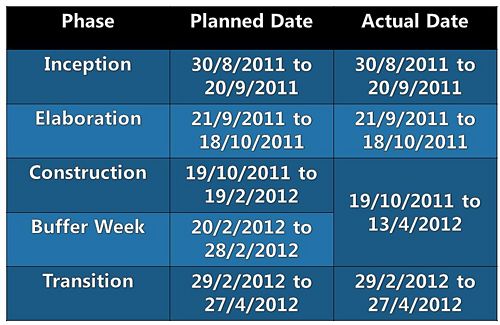 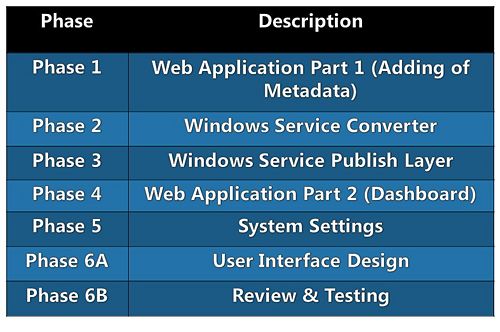 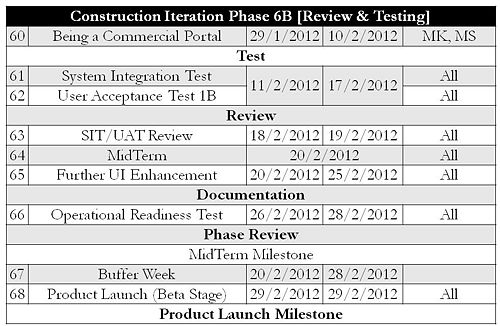 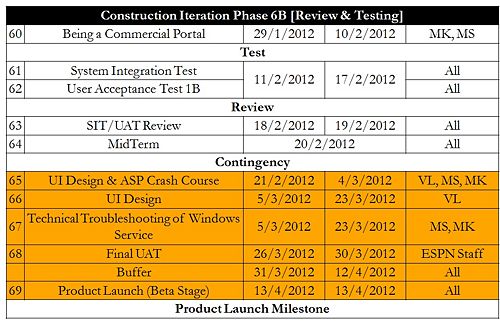 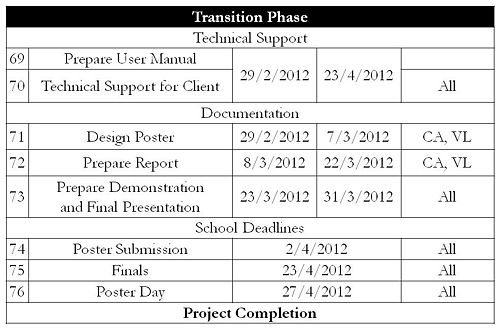 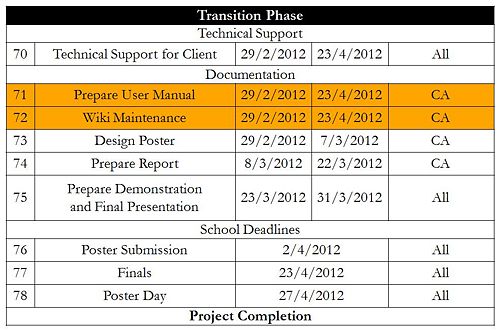 To measure the team's project progress, the team has implemented the Schedule Metrics to monitor the time taken for the different phases and to ensure that the team is following the schedule as predicted. 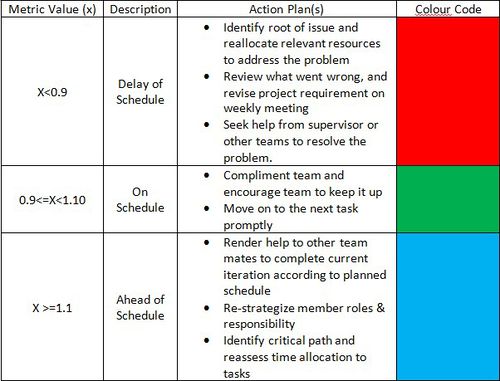 Most of the tasks during the Development Phase have been completed according to schedule as the team has been well-balanced in ensuring that the tasks as completed as planned. However, after the Midterm, the team has faced several setbacks that require re-scheduling of the tasks a couple of times in order to ensure that the team is able to get the whole backbone of the system up and be ready for cloud deployment to be launched on 29 February 2012.

The team has made good use of the schedule metric that was developed during the initial stage, which has helped to weigh the importance of the tasks that have been delayed and allow the team to implement the necessary action plans to bring the team back on track.

The team has also implemented the use of Bug Metrics that is used to determine the number of bugs that arise during the development process, and is possible to affect the entire project. With the bug metrics, the developers and team are able to know what necessary actions need to be taken in order to ensure that the whole project runs smoothly and according to the planned schedule. 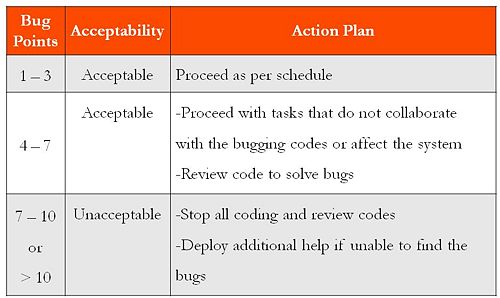 The team is pleased that despite an extended development schedule as compared to the other groups, the team has aimed to have minimal or no bugs arising during the process and hence, does not affect the team's project schedule. In a way, bug metric has helped the team to be more careful in preventing bugs from occuring, which eventually helps to keep the team on track. 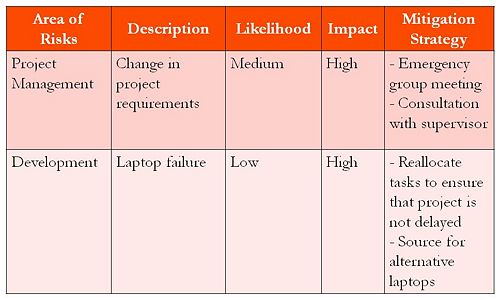 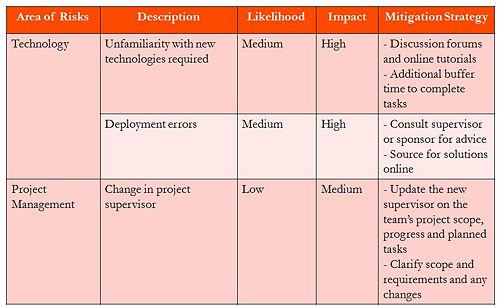 Throughout the entire project, the team has learnt that there are risks in every project and the risks encountered are similar yet different as compared to other groups and it is important to come out with mitigation strategies to solve these risks and prevent any possible delays in the project schedule.

The greatest risk faced by the team is in the area of technology. As the technology used by the client has not been learnt by the team, there is a steep learning curve for the team to be able to understand the technology in the shortest possible time in order to ensure that the entire development process using this technology is smooth. To tackle this issue, the team has created additional buffer time in the project schedule for the learning of technology, as well as looking through discussion forums and online tutorials in order to have hands-on experience and better knowledge. These skills have equipped the team with the ability to learn new skills yet at the same time, putting the technology learnt into possible use during the entire project progress.

There is some technical complexity involved during the development process, for technologies that have not been taught in school.

The entire project was created based on a tight collaboration with the client and all requirements and design are agreed on common consensus. With this, the quality of the solution is in excellent working condition and meet all criteria set by the client where there are no errors during the development process.

Deployment is no easy pick for web applications. A whole lot of steps need to be put in. Therefore, we did regular deployment of the entire web application package on the FTP servers provided by ESPN. The deployment could only be done on-site due to authentication issues that our client was worried about. We did the deployment such that we copied the entire site onto the FTP server and had to manually modify the Web.Config file to include elements such as sessions in order for the site to work as well and flawlessly as it does on our localhost.

The windows service is deployed on the server of ESPN office. This server contains mapped network drives that will contain the video asset. The four windows services is deployed using installutil.exe available on .NET (C:\WINDOWS\Microsoft.NET\Framework\v4.0.30319)

Unlike most projects created in Visual Studio, Windows Service projects cannot be run directly from the development environment by pressing F5. This is because the service in the project must be installed before the project can run.

However, for convenience sake, the team has used a project installer which packages the Windows Services into a MSI where it can be double clicked and installed without running the command line.

Initially, we found out that the system could not support .NET 4.0. After seeking permission, we were given the go ahead to upgrade the .net version framework to 4.0. 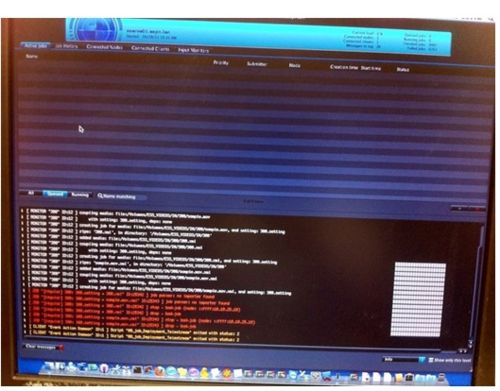 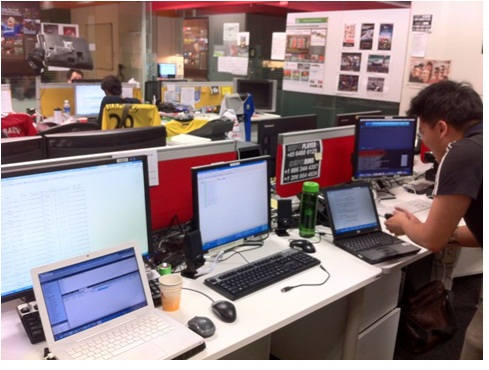 The team has conducted user testing for 4 members from the professional departments (Non-IT) to test on 3 Web Modules and 3 Windows Service Modules. The test is questionaire-based for with Pass/Fail for each function in the test plan, as well as the usability by the end-users. 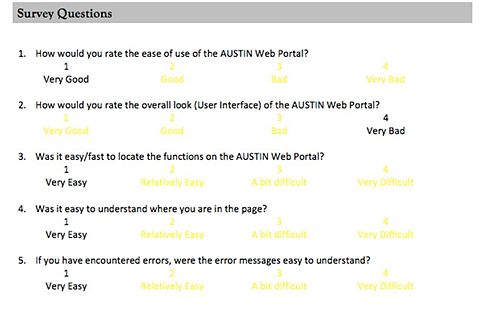 The team has conducted 2 rounds of user-testing, where the second round of user-testing is modified and improved from the results obtained from round 1. 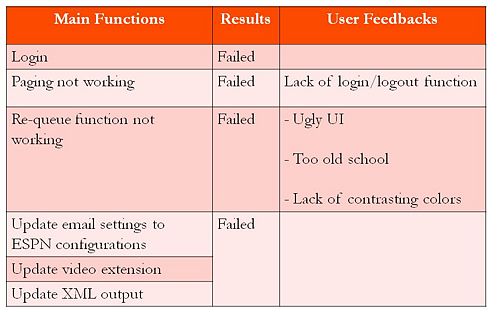 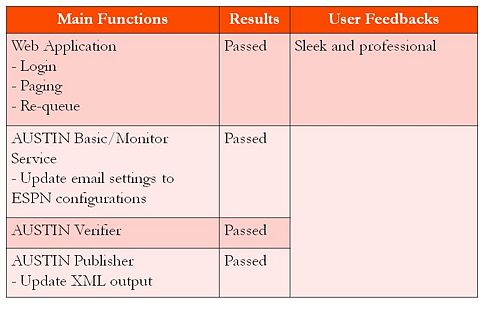 These are the lessons and skills that the team has learnt throughout the entire project.

With the different schedule that all team members have, it is tough for the team to have a consensus on the meeting dates to get the tasks and functions done. Despite this, the team has been trying our best in re-scheduling other appointments or tasks for a weekly meeting within the team, and with the client and supervisor. We spent countless numbers of hours discussing and reviewing the available dates where all of us are agreeable and convenient in doing our best for the project.

Since the solution will be deployed in real-life, it is important for the team to understand fully on how ESPN conducts its video uploading process in ensuring that the automated solution will be able to fill in all gaps. The team has spent countless meetings at the client's place to have a demostration and ask questions that will be related to the end-product. The team is now confident of explaining the entire process and how the solution will further enhance the existing process.

Since the solution requires the implementation of skills that were not taught in SMU, the team has settled down and learnt the skills together so that every member will understand and be able to use it in future when needed. It was hard for the team at first to have a common timeslot just to learn the new skills, but we are glad that the efforts are worth it as everyone is now equipped with the same skills and has been able to assist the weaker members during the development process.

User testing has allowed the team to know the areas of improvements for both the web application and windows service as we are able to have a clearer view of what the end-users are looking at and how the solution is able to help them. A clean user-interface together with a documented user manual helps to make it easier for the end-users when using the system. The team has also obtained feedback from them and made improvements or adjustments based on the potential issues that the first-time end-users face in order to ensure that the system is doing it's best in assisting them and improving their business process.