Final Presentation Slides : To be uploaded

Since our midterm presentation, we have made several changes to our web & mobile application. As a team, we discussed on various aspects - including the UI, features, gameplay, etc and made improvements. Though, we had to remove some features due to time constraint, we focused more on the gameplay and usability which we feel was worth it.

As any project would,we faced issues along the way which we managed to resolve. We are proud of what we have achieved through this project as a team.With that, we are currently approaching 9th Milestone: Final Presentation, on 5 December 2012.

For our milestones, we had 3 key changes from our planned schedule :


1. Acceptance - We had issues with Amazon EC2 Cloud deployment a week before acceptance. Hence, we felt that it would be better to have abit more time.
2. Google Play Deployment - We were challenged by Prof Gan to have it deployed to Google Play by Midterm and we wanted to achieve it. Furthermore, we felt that it would be better for users to test on their own mobile phone. This is something that we are really proud of.
3. User Testing 3 - In order to cater to more people and get more feedback for improvement, we added in another user testing which receive positive feedback from the testers.

Taking the suggestions from our reviewers as well as team members, we decided to prioritise the functions that is crucial for the success of the game. Hence we decided to remove /edit : 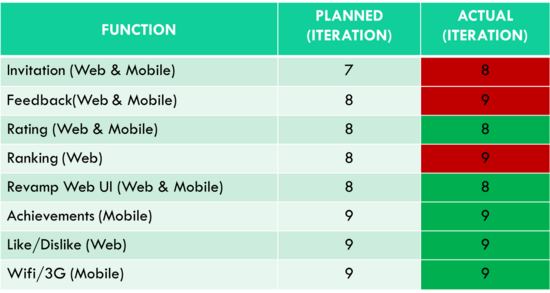 For more on schedule :

When developing for Android, it is important to provide for the different Operating System(OS) versions. The reason is that mobile phone users do not upgrade their OS unless they have a need, resulting in OS spanning from 2.3 to latest 4.2. Hence, the User Interface (UI) options and display would vary from OS to OS, making it a challenge to find ways to create a consistent and user friendly UI.

- Creating Custom themes that modifies default theme of the OS such as changing text color of EditText box and TextView into black permanently which is default white in OS 3 and above.


- Providing consistent Actionbar support through the use of external library, Actionbarsherlock in the application, as OS 3 and below by default do not have Actionbar available to them.

As our application heavily relies on answering questions with pictures, long uploading time required when the user is outdoors would affect the gameplay. As such, steps are taken to cut the uploading time, by allowing the user to upload the pictures after the quest.

1. Answer data is saved in the phone
2. Set timeout when using 3G
3. If did not connect to the server, user is given the option to proceed.
4. When the user logins later, he is able to upload the clues using wifi. 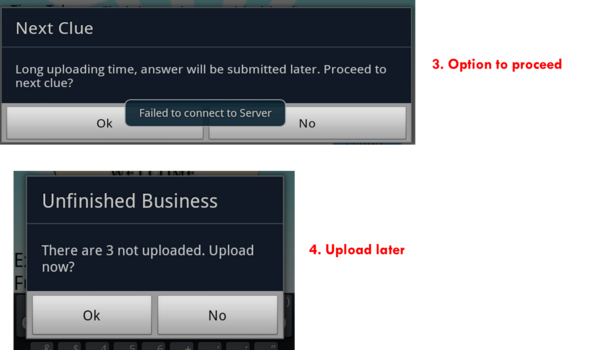 Our mobile application caters to a range of android SDKs and able to play the quest without Wifi/3G once the game is downloaded into the phone.

Our Mobile application Gr8Quest has been published on Google Play since 25 September 2012. We were required to create an account, pay for a developer account and upload the relevant APK file into the Google Play Store.

Users with android devices are able to download and use our application. As compared to our previous versions, this version allows various versions of android to use the application and compatible with different screen sizes.

Get our app now on Google Play

As a team, our journey has been a fulfilling one. From almost not making it through due to our demo in our acceptance to where we are right now ( both mobile & web application being successfully deployed), we are proud of what we have achieved.

We have learnt new languages, skills & concept through this project which would be useful for us. We had to do alot of research and did faced challenges along the way. E.g. website down the day before mid term, MVC framework updating its version. However, we manage to pull through all these challenges and achieve what we have today.

We had the luxury to pick and choose what functions we wanted to do for our IS480 Project by our sponsors. Throughout the project - due to challenges faced and time constraint, we had to scope down our project abit where we priortized the functions and worked towards building a fun, challenging and user friendly application.

The key to any successful project is communication skills - it can cause the team to stay together or break apart. We always hear each other out and explain our points without being afraid of being shot down by other team members. Through having an open communication, it was easier to put points across and make decisions.

We have sure come a long way since where we first started during the acceptance presentation. I have learnt the importance of maintaining relationships with the stakeholders and manage the team at the same times. At times, it can be tough trying to find a common ground which would satisfy both parties. Initially, i placed alot of emphasis on the team feeling comfortable with their pace, however decided to push them once I realise it would not work that way.

Managing a team is definitely not easy and I have realized how communication plays a key role in ensuring the success of a project. Having team members to be there responding is important as well, if not the project and progress would be stagnant. Being able to take everyone's input and find the best solution together is important to learn and grow as a team.

As I leave SMU this semester, I must say that FYP has been a great experience which i feel added value to sponsors and not just for a mere grades.

FYP has challenged me to a large extent. Prior to the mid term presentation, there were various issues with the server which had to be resolved. There was not much help online which required me to code by myself where I invested alot of time and effort.

FYP has definitely equipped me with the skills needed for the working world where there would be tight deadlines, having to work in teams and continuously learning and growing with the changing technologies and tools.

The overall FYP journey was an exciting and enriching one. As a group, we pushed our limits to not just attaining an acceptable level, but to go beyond that with continuously improvements by consistently reviewing issues and conducting endless discussion.

As a usability analyst, I learnt to think like a first timer who has never use the application before and pick up information or functions which are important to aid user in navigating the application. To ensure high quality of functions, I would pretend to be someone who tries to crash the system by stress testing the application. I would test every possible scenario to ensure that the system works properly and does not crash.

FYP emphasize the need to learn as you go as I had to heavily research about the Dos and Don'ts when developing the Android application. And that it is also important to try and modify, as what might work for one developer, might not be the solution you are looking for.

Aside from that, having teammates to bounce ideas about how the function should be presented is rather important. Endless discussions has led to our User Interface changing drastically from the beginning to the end. And I rather like the results.

This FYP is about working as a group to achieve the same goal. Each one of us has our own strength and working style, thus it's important for us to brainstorm, share our own opinion, discuss to not only find the best solution for the system, but also enhance our productivity and efficiency.

During this project, I have learnt how to think as a user, not a programmer when designing a web. Sometimes when looking at the website in a different perspective, I found out what was really needed to make the website easier to navigate and comprehend for users. It is important to note down feedbacks from groupmates as well, they are the real users that can give me invaluable suggestions. Besides, working with new programming language is not easy but fun. It requires a lot of research but it gives me endless interesting aspects to explore.