In order to find out the usability of Flauntpage, we conducted a Heuristic Evaluation.

This HE focuses mainly on 8 Usability Heuristics focus points as follows:

Our first User Testing was conducted to gather more in-depth insights on the usability of FlauntPage and to ensure that the deployed version is running smoothly.

To find out the effectiveness of FlauntPage and how convenient it is for users to create employment documents using our application as compared to other tools like Microsoft Word.

To find out the effectiveness and value of FlauntPage and how convenient it is for companies to find suitable candidates as compared to other channels (e.g Other job portals, newspaper, company website etc)

1. With all the resumes collected from the previous testers, we will get another group of testers to measure the quality of the resume. (Total 9)

2. Testers were then tasked to rate each resume between the scale of 1 to 5 (1 being the lowest)

1. Based on the feedbacks provided by the testers in Part 1 of the testing, team identified the major feedbacks and implemented the changes Example of a resume created by user. 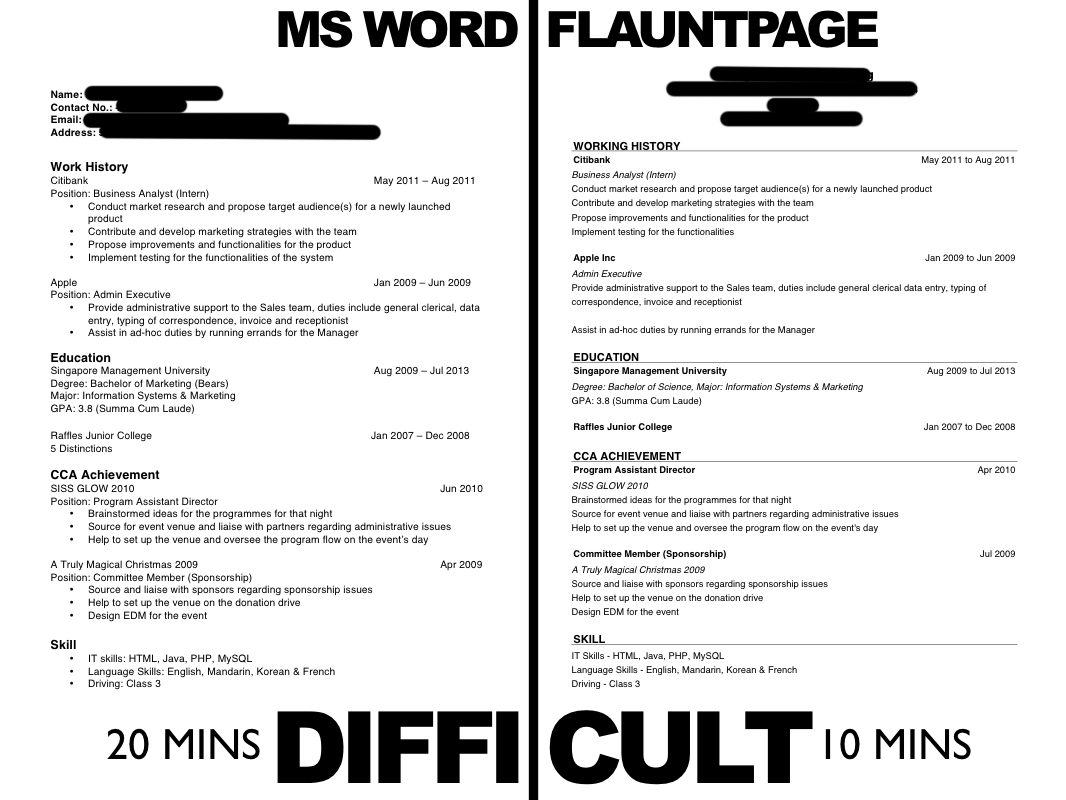 We do not have a concrete conclusion from the easy level results, however, for the difficult level, we can derive from the test results that users generally take a shorter period of time to create a resume using Flauntpage as compared to using MS Words.

Another point to note is also as highlighted in the graph, the user actually took a much longer time when using FlauntPage. This was because the user is entirely new to FlauntPage and is not accustomed to the interactive features that FlauntPage provides such as drag & drop. He spent spent more time sorting the resume content into the required format as compared to when he was using MS Word.

The above findings allow us to realize the importance of some form of guidance or tutorial to be made available for 1st time users to let them get used to using some of the features in our application.

2. With the ratings provided by the testers in Part 2, team ploted a graph (time vs quality) to identify the correlation between MS Word and FlauntPage

The team expected a curve very much different from the one we plotted based on the results of our part 2 User Test. We could have missed out or overlooked certain points in conducting this test as we had expected quality of MS Word resumes to increase as time increases. & we had hope that the curve of FlauntPage would be near or catching up to the curve of MS Word as time increases.

However, according to the graph plotted above, we can see that for a shorter time taken to create a resume, the quality is much higher for FlauntPage as compared to MS Word. This is true because users require more time to build their resume using MS Word with regards to formatting. However, with FlauntPage, formatting of the resume is taken care of by the application and the end result, (when compared by testers), FlauntPage generated resumes which are of higher quality as compared to MS Word.

We also observed that most testers rated the resumes based on the following factors: 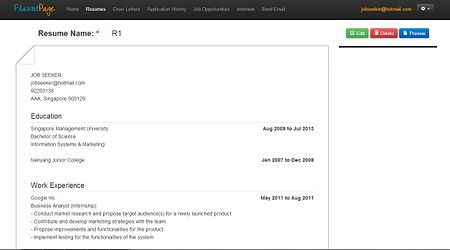 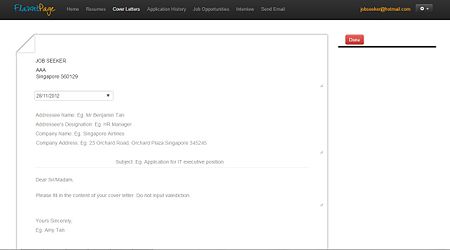