Despite rapid proliferation of shopping centers, CapitaMalls Asia (CMA) continues to remain highly competitive through its focus on customer’s experience. Its principle on providing different shopping experience - such as by pioneering the signaling of parking lot availability through the usage of red or green light, has distinguished CMA from other malls. This strategy has worked for CMA, bringing CMA more mall patrons from year to year

In alignment with this emphasis, our team aims to develop a feature of attraction based on movement sensor technology, to provide CMA shoppers with unparalleled shopping experience exclusive to CMA. As business value also needs to be taken into consideration, our product will also be calibrated to execute targeted advertising. This product will then delight both shoppers and tenants alike.

Moving is one of the characteristics of living beings. Research has also proven that body language conveys more about a person, more than 50% compared to the content of what a person says. The term natural user interface is hence derived from this understanding that gestures are inherent in human beings. There are basic gestures that are somehow universally understood and used by everyone. An interface leveraging on gestures therefore promises ease of learning - even children should be able to pick it up in a short period. It stokes shoppers' curiosity due to the usage of a different kind of input: no typing on keyboard or tapping on the screen. Having to move to execute an action also creates more involvement, user will feel immersed in the scenario; hence the dynamic experience.

Augmented reality enhances this experience further as user's image will be displayed among virtual background, transforming shopper from a mall to the exotic Egyptian desert, for example. A photo will then be shot, incorporated with a Microsoft Tag that will direct shopper to the gender-specific advertisements, promotions, or event information upon scanning.

Shopper's gender will be determined based on the processing of joints x, y, and z values captured by the Kinect camera; and the derivation of gender guess by neural network artificial intelligence based on the parameters passed in (joints and other factors).

The Kinecttechnology is the core of AlterSense. Kinect is a motion-sensing input device developed by Microsoft for Xbox 360 video game console and Windows PCs. It leverages on a technology enabling tracking of movements in three dimensions, using an Infra-Red (IR) laser emitter and camera, as well as a special microchip. 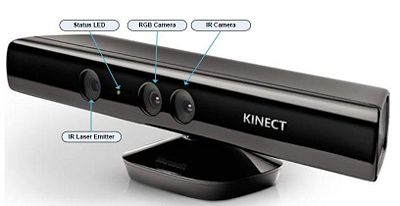 Interpretation of specific gestures, face tracking, and speech recognition supported by this technology are suitable for the creation of an electronic product with which shoppers can interact. The recent release of Kinect for Windows also opens up doors for commercial projects based on the Kinect platform, which were previously relegated to research and non-commercial endeavors.

A Kinect, connected to a computer, will be used to capture movement and environmental analysis data (shoulder width, height, whether shopper is wearing long skirt, whether shopper's bag is hanging from the wrist; the way ladies usually hold their bags). A computer – installed with Visual Studio Express and Kinect for Windows Software Development Kit, will process all the captured data and generate output (photo with targeted advertisement tag) according to suitable input. A short throw projector will be used to project this output (image of shopper combined with animation) onto the display. 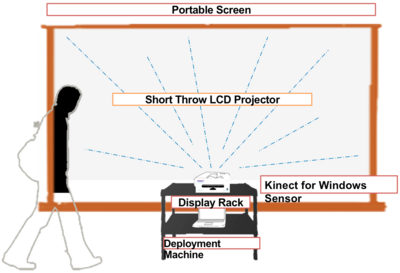 AlterSense will be deployed to a projector exhibit using a large screen projector. The connection is established using a High Definition Multimedia Interface (HDMI) to transfer graphical content and audio to the display from a workstation capable of HDMI output (the computer). With increasing adoption rates for HDMI, these interfaces come standard with most modern television sets.

Displays equipped with HDMI ports are compatible to communicate with the workstation, which would be running AlterSense application in the background. A HDMI cable would be used to interface the workstation and display during deployment.