As of 21 September 2012, our game has been launched on Google Play Store. The current release features 3 playable stages, each stage featuring 4 levels each. The next update would include additional game stages and further refinement to the game.

We have planned for a total of 8 development iterations

We have only changed the scope of each iteration 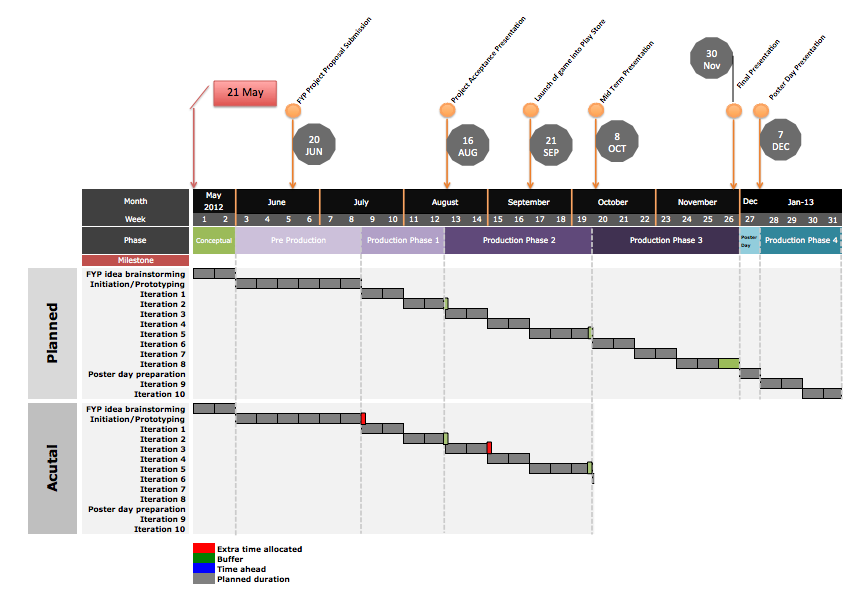 Task delayed: Implementation of swinging vine and Gralch aiming controls in functional prototype.
Reason: The task was more complicated than what we had expected. It was a challenge to mimic the swinging action of the vine in Unity3D and we have to seek help and advises from Unity3D forum.

Task inserted: Game optimization - to reduce APK file size and reduce the number of visible object count in a frame.
Task pushed back: Building of stage 4 was shifted to iteration 6
Reason: Team feels that game game optimization is needed because we have to meet Google Play store requirement of less than 50Mb APK file size. We also need to reduce the visible object count because the game lags a lot on Samsung Galaxy SII.

Details of the change in game play can be found here: [Game Mechanics]

User feedback collected were analyzed and reviewed by the entire team where game play was concerned, because it affects our project plans and execution. The team deliberated on various issues concerning the fun aspect of the game play, length of the game play, scalability of the game, and appeal of the game to various age groups. Till date, we had two revision of our game mechanics.

Main findings based on user feedback is that the game is too simplistic and gets dull after a couple of tries. Looking into other potential issues such as scalability and the appeal towards our target age group, we realized that the concept was not enticing enough and should be refined.

Without wanting to lose the concept of the swinging vine, we incorporated this into our refined game play which looked at collection of tokens. However, user feedback revealed that the game is overly challenging and they get discouraged after a couple of tries. Moreover, they felt that the game was too static where Gralch was concerned and would like to see more animations

We decided on this final version of the game play after taking our project schedule into careful consideration as well as reviewing our user feedback. We kept obstacles and modified concepts from our previous two game plays and incorporated them into our final game mechanics. The results from our user tests were a strong indication to further our development and refinements.


We have completed a total of 5 iterations and have a remaining of 3 iterations.

In all iterations, the team has put in additional hours to ensure that all tasks are completed in time. This can be seen from the actual man hours compared to the estimated man hours, and the EC score of 1. For instance, in iteration 4 & 5 when we were preparing for our launch on Google Play Store, it coincided with the examinations week. To ensure that the team is on schedule (EC = 1), the team worked extra hours as seen from the respective planned versus actual man hours.

The impact of bugs on our development works have been generally low to moderate. Only two instances of a critical impact (BSI = 10) occurred in iterations 1 and 3 respectively. This was due to the changes made to our game play, which required new logic implementation for our codes. The immediate action was to halt development works until the bugs are resolved. These bugs were resolved within the stimulated task allocation duration and did not impact our project schedule

The following is our prioritized risks as at Mid Term presentation. Click here to view our full list of risks and mitigation plan.

Summary: Essentially, there are 4 phases in graphics development: (1) Discovery Phase (2) Sketch Phase (3) Color Phase (4) Delivery Phase. The discovery phase is basically the communication of all ideas from the team to the designer to create the character and environment. This brainstorming session took approximately an hour. The sketch phase is where the initial design concepts of character and environment is being presented once again to the team. Typically, the first design draft gets rejected but the team's feedback and directions were helpful in materializing the final concept art. This process took approximately 2 weeks. The color phase comprises of a few character sketches with different colors. Again, many rounds of testing were done with the environment to see which color looks best on the character. Finally, the delivery phase consist of the final character and its frame-by-frame animation to be exported out for the game.

Below lists the many versions of design concepts:

Every images before appearing on the scene has to be added to a sprite collection library where its precise settings and parameters are manually set in order for the image to take shape in the scene and allow it to have natural interaction with other objects. 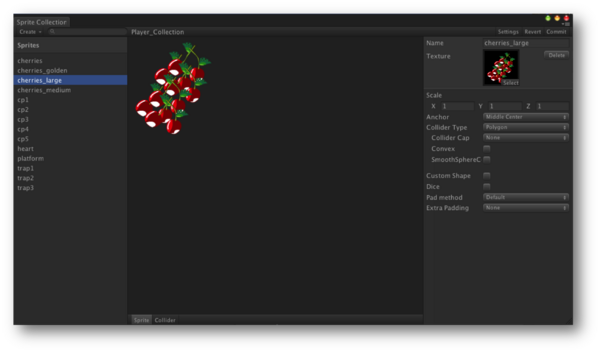 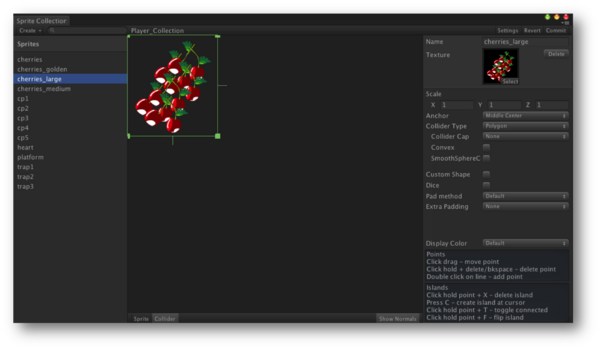 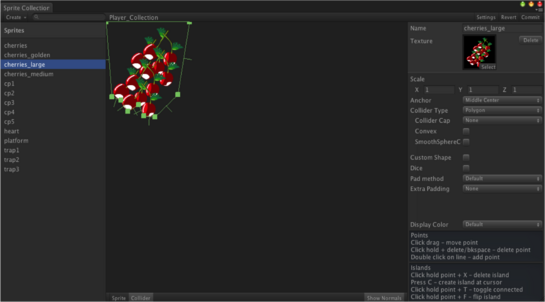 The following is an example of a scene setup that consists of 16 different objects laid out in one frame of the scene. The average amount of objects in one stage would go up to about 400 and the crucial part of making the game fun and challenging greatly relies on the precise manual positioning of every objects in this step. 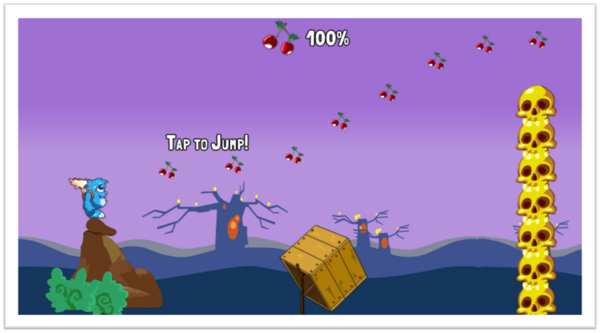 The main focus of the development work of our project is to achieve precise control over the manipulation of the components' behaviour that are attached to all objects with the use of C# scripts, this includes collision and effects handling for every single event.

With the use of C# scripts, we are able to have precise control on every collision events and the desired outcome of each case: 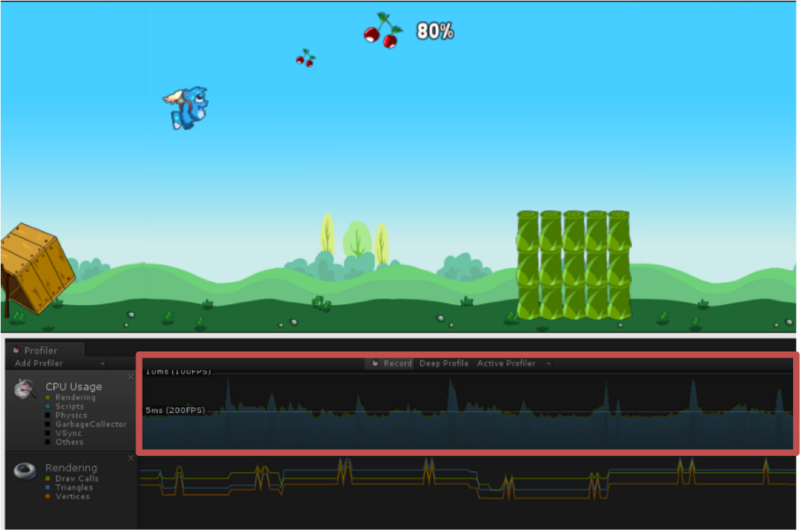 Gralch - the Cherry Monster is published on Google Play Store. The publishing process requires us to register and pay for a play store developer account with Google and uploading the APK file into Google Play Store.

User with compatible android devices would be able to download the game from the Play Store, accessing it through Google Play Store app or the online library.

As compared to other user testing used for web portals, game user testing is much different. Our testing involves no test scripts and is mainly based on the FUN aspect of the game.

Since launching of our app to Google Play Store, it has expand our pool of user testers. It allow friends and public to download the app conveniently and this helps us to keep track a list of devices that are incompatible with our app. We are still investigating the incompatibility issues on some android phone and will release an update should we found a fix. Below is the list of incompatible devices found to date:

We do not have any sponsors nor clients to provide us the budget for our marketing campaign. Nevertheless, we have came out with a marketing strategy that utilizes cost effective solution to increase 6P presence and organic searches in the web.

As part of our marketing campaign, we have created our web page to increase our web presence. On our website, we have provided the link to download our app from Google Play, forms to contact us for support and general enquiry.

We have also listed our sites to Google and Bing/Yahoo search engine using the respective webmaster tools.

In addition, we have also set up blog where we will post the latest development updates and talk about recent events. By doing so, it will helps to add in new contents to our site, thus increasing the change of being crawled by search engines bots.

We have set up Twitter account, Facebook and Google+ pages. Social media is a good platform for us to share the news of release update to our friends and spread via word of mouth. We will post status updates to all our social media accounts frequently and will help create awareness within our social circles.

As our game story is primarily based on a monster following a trail of cherries to find his friends, we have decided to focus on our keywords on "monster". To make it more specific, we have include "games" this keyword and thus, "monster games" shall be the main keyword we are focusing on for our SEO efforts.

A quick check on "monster games" using the Google Keyword tool, it revealed that there are a total of 1.5 million searches performed on variants of "monster games" globally in every month. This shows that games with story focusing on monsters concept is abundant and it is a competitive market.

And currently, our game is free and another keyword to focus on instinctively will be "Android free games". Likewise, after doing a check using Google Keyword tool, it revealed that there is a global search performed on variants of this keyword every month. This is another keyword that we can use in our SEO.

All in all, we have been using variants of "monster games" and "android free games" in all our site contents, social media posts and app description in Google Play Store. However, SEO takes time to refine and perfect and it will not be able to drive downloads from Google Play Store nor increase our website traffic overnight. Nevertheless, we will be monitoring the web traffic frequently using Google analytics tool and will refine our selection of keywords, thus increasing organic searches from search engine.